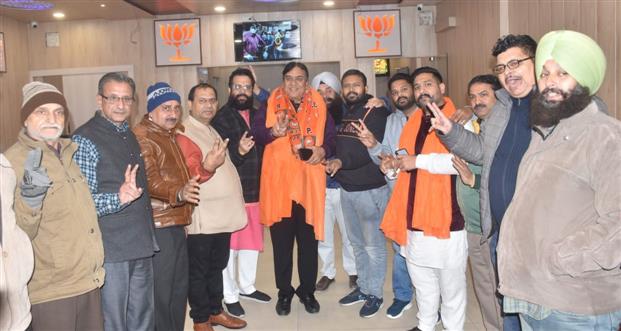 Supporters celebrate the announcement of the candidature of Gurdev Sharma from the Central constituency by the BJP in Ludhiana on Friday. Photo: Ashwani Dhiman

The Bharatiya Janata Party (BJP) today announced candidates for its five seats from Ludhiana. Two candidates from the urban and three from rural areas were announced.

From the rural areas, the BJP has announced, Gurpreet Singh Bhatti from Khanna, SR Ladhar from Gill and Kanwar Naredra Singh from Jagraon.

From the Ludhiana West constituency, advocate Vikram Singh Sidhu will be contesting. Last year, it was Kamal Chatly who had contested on this seat for the BJP. A first-timer in 2017 elections, Chatly had stood third. Chatly has now joined the Shiromani Akali Dal. Sidhu’s passion for social justice and resolving people’s problem became his motivation to practice law and thereafter inspired him to join the BJP in 2020. Sidhu is member of the state executive committee of the BJP and will have a tough battle against siting MLA Bharat Bhushan Ashu of the Congress.

From Khanna, Gurpreet Singh Bhatti has been announced candidate by the BJP. Bhatti had recently joined the BJP after leaving the Aam Aadmi Party. Earlier in 2011, Bhatti had joined hands with Manpreet Singh Badal and had fought 2012 elections as the People’s Party of Punjab candidate from Khanna. In 2016, he joined the AAP and fought from Amloh. He lost both the elections. Gurkirat Singh Kotli from the Congress is the siting MLA from Khanna and also Congress candidate for the constituency.

From Jagraon, Kanwar Narendra Singh has been announced as candidate by the BJP. Kanwar has been associated with the BJP for the past many years and has retired as a Tehsildar from Ludhiana. He has also been president of the Tehsildar union. Saravjit Kaur Manuke of the AAP is the siting MLA from Jagraon.