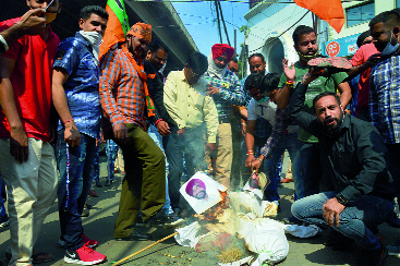 Slamming the statement made by MP Ravneet Singh Bittu on attack on BJP president Ashwani Sharma, BJP leaders and workers today burnt the effigy of the MP at Clock Tower on Thursday. They raised slogans against the Congress and its leaders.

Pushpinder Singal, a BJP leader, said the statement made by Bittu that he was responsible for the attack on BJP president Sharma was uncalled for. Singal said Congress was playing dirty politics and its leaders should be condemned for making such irresponsible statements.