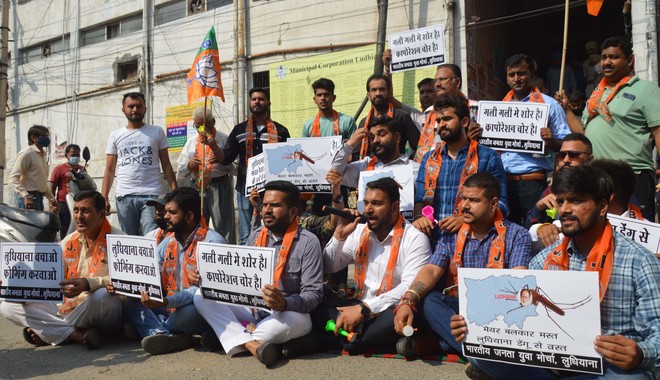 The Bhartiya Janata Yuva Morcha today held a protest against the MC for allegedly not taking the required steps for the prevention of dengue and malaria. The protesters alleged that the fogging is not being done properly in the city.

District president of the BJYM Kushagar Kashyap along with other party workers held a protest outside the MC Zone A office. They said they are protesting in order to wake up the Municipal Corporation as dengue cases are rising every day.

Kashyap claimed that the hospitals of the city are full of dengue patients and even the local clinics of doctors are seeing every other patient suffering from dengue.

He alleged that there has been no fogging in any ward and if there is fogging done by corporation officials it is being done after 20 to 30 days, which should be done twice a week. He said there is no drive held by the MC in order to make the people aware of waste management and avoid water getting stagnant, etc, to keep away the mosquitoes.