BKU launches stir against pollution in water bodies in Punjab : The Tribune India

BKU launches stir against pollution in water bodies in Punjab 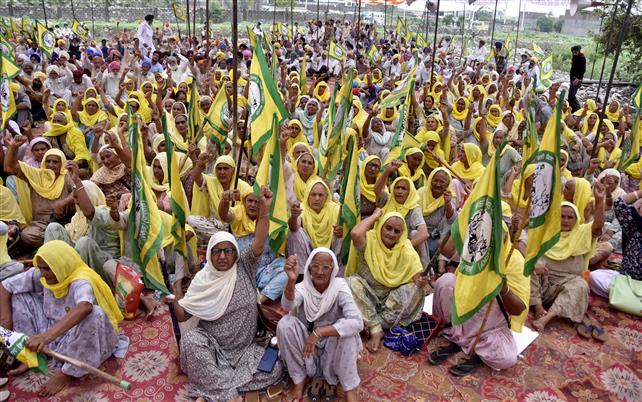 Raising voices against the industries polluting the waters of Punjab, members of the Bharti Kisan Union (Ekta Ugrahan) launched a five-day protest near Balloke Bridge over Buddha Nullah in Ludhiana on Thursday. The protesting farmers raised questions over the successive governments for ignoring the erring industries that pollute Buddha Nullah, Sutlej and other water bodies in the state.

They also raised questions over the World Bank funded upcoming 24x7 canal-based water supply project in Ludhiana. They said the government should not hand over water supply control in hands of corporate houses.

Addressing the gathering, union president Joginder Singh Ugrahan said blamed the corporate houses for polluting the Punjab waters. He said when the river waters flow into Punjab, untreated waste from the factories is dumped in these. The river waters are being openly polluted by the factories. He said Buddha Nullah’s polluted water is released into the Sutlej.

The protesting union members said hundreds of factories in Ropar, Jalandhar and Ludhiana are dumping their waste in the rivers. Five crore people have been left to suffer health problems to make some corporate houses happy, they said.

Sudagar Singh, a union leader, said, “We are against the wrong policies of World Bank. Under a conspiracy, the groundwater is being depleted and polluted in the state. Besides, the waters bodies of state are also being polluted so that the waters can’t remain drinkable or usable without treatment. If water supply control is given to corporate houses, people would be forced to buy treated water from them for all purposes. The people would not be allowed to install their own water pumps. In Ludhiana, World Bank-funded water supply project is to be introduced. The government should not give control of water supply to private hands and it must reject the policies of the World Bank.”

The union leaders demanded that the waste water of the factories in Punjab should be treated and reused. All the treatment plants in Ludhiana should be made fully operational. The leaders said if the government does not wake up, they will be forced to intensify their agitation.