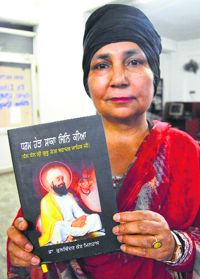 Ludhiana: Students of Gyan Anjan Academy released a book on the life of Guru Teg Bahadur Singh, Dharam Het Saka Jin Kiya. The book has been written by Dr Kulwinder Kaur Minhas. Dr Minhas, president of the academy, said she wrote this book on 400 years of Parkash Utsav of Guruji. She said: “Students were told about the great sacrifice of Sri Guru Teg Bahadur. The book has 14 chapters which discuss various phases of Guruji’s life. They also recited poems about Guruji’s life on the occasion,” she said. TNS

BCM School, Basant City, organised a virtual session with laproscopic surgeon Dr Vipan Goyal on World Day for Safety and Health at Work. Around 300 parents participated in the session. Dr Goyal told parents not to panic if someone in their family gets infected with Covid-19. Principal JP Singh also addressed the parents and advised them to take all precautions to keep the virus at bay. TNS

Students of DCM Presidency School celebrated International Dance day with zeal. The aim of the celebration was to inculcate interest of students in various dance forms. Teachers explained students the importance of the day through a PPT. Later, students and teachers enjoyed dancing to foot-tapping music virtually. TNS

To celebrate International Dance Day, Green Land Convent School, Sector-32, Chandigarh Road, organised an online solo dance competition for students of pre-nursery to Class V. Participants performed dance forms such as bhangra, hip-hop, classical and zumba. Teachers motivated students to take up dancing and told them that it was a great form of exercise. TNS

BVM, Udham Singh Nagar, organised dancing activities to celebrate International Dance Day. Enthusiastic performers of Class I to V showed their skills in folk dances while students of Class VI to VIII tapped their feet to the beats of patriotic songs. Dancers of Class IX and X enthralled the audience virtually with their semi-classical dance performances. Principal Ranju Mangal appreciated the efforts put in by students. TNS

GMT Public School, Jalandhar bypass, organised a Covid-19 vaccination camp for its staff and parents on campus. Principal Jasbir Kaur Bal urged the attendees to motivate others to also get themselves vaccinated. She thanked the team of doctors for their services. TNS

To commemorate the 400th birth anniversary of Guru Teg Bahadur Ji Guru Nanak International Public School, Model Town, have been holding year-long programmes. Students of Class I to VIII participated in a series of events from their homes. A Q&A round on the life of Guru Teg Bahadur was also organised. Besides, students composed poems and wrote sakhis on his life. Principal Gurmant Kaur Gill also shed light on the life of Guruji. TNS