Boxing to be main attraction in Jarkhar sports festival 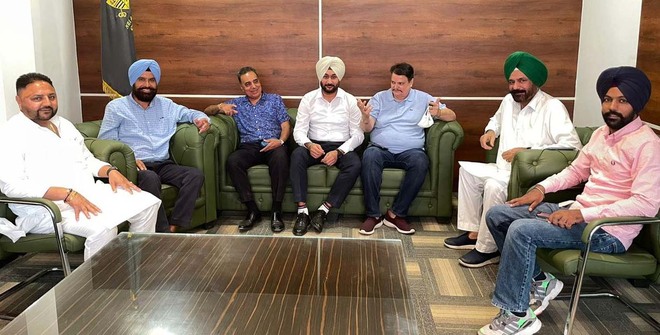 Organisers of the Jarkhar Sports Festival in Ludhiana. Tribune photo

Boxing competition will be the main attraction during the 35th Jarkhar Sports Festival. The festival, popularly known as the Modren Rural Mini Olympics, is scheduled to be held from January 24 to 26 next year.

It was announced after the meeting of the Mata Sahib Kaur Sports Charitable Trust, Jarkhar, held here at a hotel, which was chaired by Narinder Pal Singh Sidhu. Popular singers Karan Aujla and Kanwar Grewal will entertain spectators on the concluding day of the festival.

Sidhu said competition in kabaddi, hockey, athletics, volleyball (shooting), wrestling and other sports disciplines would also be organised during the festival to be sponsored by The Coca-Cola Company, Avon Cycles, 5Aab Foundation and Dream Eleven of Mumbai.

“The All Open Kabaddi Cup, in the memory of Nain Singh Grewal of Jodhan, and Canada Kabaddi Cup will also be held. In hockey, top teams of the region would battle it out for the Mohinder Partap Singh Grewal Memorial Cup in the boys and girls’ sections,” he said.

He said eight motorcycles and 100 bicycles would be given to winners. Besides, on the concluding day, six prominent personalities would be honoured for their contribution to their respective fields.