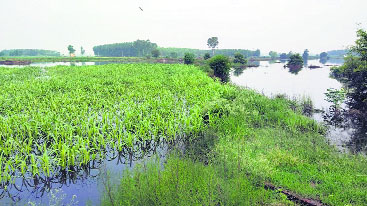 A portion of the Buddha Nullah banks was washed away recently near Talwara village and Bagga Khurd in Ludhiana district. As a result, polluted water is continuously flowing into the fields, damaging the crops and leaving farmers worried.

Villagers said the banks had breached when the city received rainfall recently but no concrete steps were taken to repair the damaged portions of the banks. Water is still flowing into the fields since the level of the drain rose again after yesterday’s showers.

Villagers are demanding that the district administration takes necessary steps for re-construction of the bank portion and cleaning of the drain at the earliest. They also demanded compensation to the affected farmers.

Sukhwinder Singh Bittu of Bagga Khurd, a village located near the drain, said, “The Buddha Nullah bank near Talwara was damaged due to heavy rainfall a few days ago but no steps were taken to reconstruct the bundh. Now, the drain water is continuously flowing into paddy fields of a number of farmers and damaging the crop.

The administration and the government departments concerned must take steps to reconstruct the nullah bundh. Moreover, the government should pay compensation to the farmers whose crops have been damaged.”

Another villager, Iqbal Singh, said “When the water level in the drain starts rising, the polluted water flows into the fields. It has already entered 35-40 acres of fields. The affected farmers have faced losses in lakhs. The polluted water has damaged my paddy crop too.”

Executive Engineer of Drainage Department Harjot Singh Walia said, “As soon as the water level goes down in Buddha Nullah, the work to repair its banks will be started.”

He, however, claimed that the level of an adjoining field was low that’s why water flowed there but it was not a major problem.

It is required to mention that a huge amount of trash has got collected in the Buddha Nullah, outside the civic body’s limit. Despite repeated demands of the villagers, the authorities concerned failed to get the drain cleaned or banks of the nullah strengthened timely. Residents have been demanding construction of a retaining wall as a permanent bundh to avoid flooding in the drain.

After rainfall in July 2017 and 2018, the Buddha Nullah had overflowed near Peeru Banda and New Kundan Puri areas. On August 1, 2019, the nullah overflowed from at least three different locations and its highly polluted water entered nearby fields and streets in these areas. A portion of the nullah bundh was also washed away and the MC took two days to plug the breach.

On August 20, 2019, after a sudden rise in the nullah water level due to Sutlej river swelling, two breaches at different locations on the Tajpur Road had flooded the slum area and nearby streets. At that time, the sewer water had also flown back in New Kundanpuri and some other areas along the Buddha Nullah.