Burning of waste near railway tracks adding to pollution woes 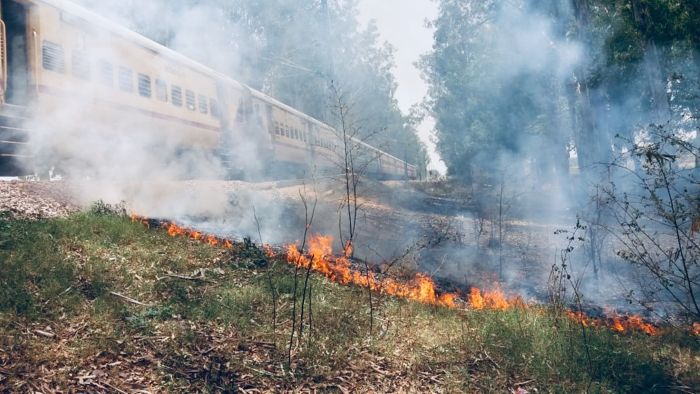 A train passes through smoke emanating from waste burning.

Reckless burning of waste at open places, including green belts along railway tracks, highways and canals, is causing danger to human and animal life, besides causing massive environmental damage.

The indifferent attitude of authorities towards small fires frequently taking place in the region can result in destructive conflagration threatening human life, health and property any time.

Contrary to claims being made by administration regarding control over accidental and deliberate burning of agricultural wastes, trees and bushes are being damaged frequently with fires that continue for days together.

Giani Gagandeep Singh, chief, Nirmal Ashram, Jandali, alleged that residents of the region had been suffering due to frequent fires along the railway tracks on Ludhiana Dhuri line and Sirhind Canal. “Besides causing direct damage to the trees and bushes, fires of any level prove injurious for the health of human beings and cattle normally grazing in the region,” said Gagandeep Singh regretting that officials of various government departments had always remained insensitive to the issue. Claiming that volunteers of his organisation had been extinguishing such fires in the past, Singh called upon the residents to inform the organisation about any small fire so that it could be checked from flaring up.

Residents demanded that the authorities should take coordinated steps to prevent fires, accidental or deliberate at initial stage. They apprehended that fire if not checked at initial state, will not be easily controlled due to lack of easy access to fire brigades. They alleged that staff posted at various places in the region usually ignored fire incidents happening in their presence. An official posted at the levelled crossing near Jandali Bridge, when asked to inform the authorities about a fire near the crossing, argued that it was a routine matter and not his responsibility to extinguish the fire.

Forest Range Officer Ajit Singh said officials concerned had been asked to be more cautious to check fire incidents in their respective areas during summer. He said a sufficient number of forest department officials had been deployed to keep a watch over the situation.