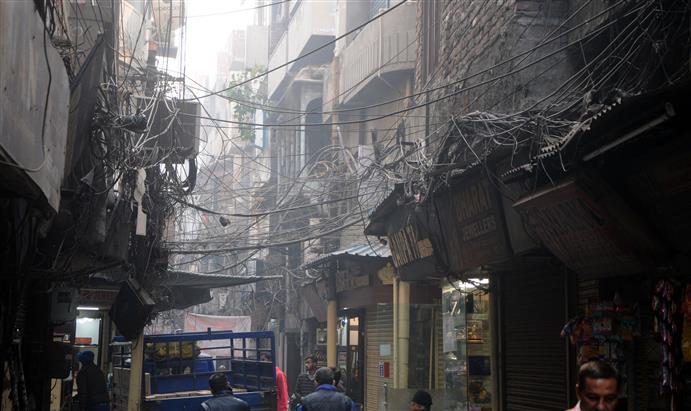 Dangling and tangled cables in almost every nook and corner of the city have become a nuisance, posing a threat of mishaps. The departments concerned, however, have failed to take concrete steps to get the mess fixed.

Requisite steps will be taken

The matter regarding dangling wires in Ludhiana city has come into my notice. Officials of the PSPCL have been asked to prepare a report in this regard. Requisite measures will be taken for resolving the issue. Harbhajan Singh ETO, Punjab Power Minister

Besides PSPCL’s electricity wires and MC’s street light cables, wires of various broadband service providers and cable TV networks can be seen hanging from electric poles, trees and walls of various buildings in residential, industrial and commercial areas of the city.

Sandeep Singh, a resident of Bandaya Mohalla, located in the narrow lanes near Daresi, said they had complained many times about wires hanging outside their houses in the street but no steps were taken to fix the issue by the authorities.

“Many times, dangling overhead wires snap after coming in contact with vehicles passing through the street. These pose a grave threat to residents and passers-by. The administration must take the matter seriously and resolve the issue to avert mishaps,” he said.

Baljeet Singh, a resident of Bhai Randhir Singh Nagar, said: “Not only dangling electrical and streetlight wires, cables of telecom companies and cable TV service providers trouble residents too. A wire has been hanging near my house for a long time.”

He said: “Sometimes, wires of broadband service providers or cable TV companies’ break. These keep lying on road for days’ altogether as nobody comes to remove them. We are unaware of whom to be contacted to fix broken or hanging cables. Loose and hanging cables are an open invitation to mishaps. The authorities concerned have failed to resolve the problem.”

President of the Indian Institute of Architects, Punjab chapter, Sanjay Goyal, said overhead wires across the city were an invitation to mishaps. “There is a dire need to make a concrete plan to handle the issue of hanging wires. Bunches of wires give a shabby look to the city. The PSPCL and the MC must take the matter seriously and initiate requisite measures,” he said.

MC’s Senior Deputy Mayor Sham Sundar Malhotra said: “The power supply wires are under the PSPCL. Regarding broadband, cable TV and other wires, the MC can make a plan to fix the issue.”