Residents, traders complaining for long but issue not resolved 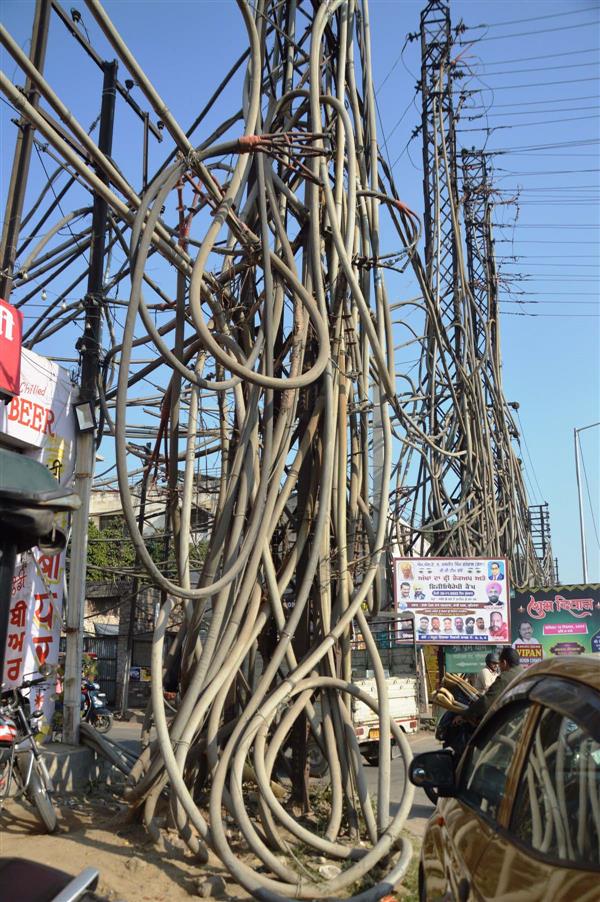 Bundles of huge electricity cables welcome commuters at Shivpuri Chowk, Kakowal junction, and other locations on the National Highway-44 in Ludhiana.

Residents and shopkeepers have been complaining about the dangling cables in these areas for a long time but the issue remains unresolved.

A group of shopkeepers said such cables pose a threat of mishaps but Punjab State Power Corporation Limited (PSPCL) is yet to find out a solution. They demand from the AAP government to take requisite measures to get the mess fixed.

The height of the dangling power cables is too low outside shops at Shivpuri Chowk. Sharing concern over the issue, a shopkeeper said: “We have complained many times to the authorities concerned but nothing has been done to date. Chances of mishaps remain high due to the low height of the wires. It would be better if such heavy cables are installed underground for the safety of people.”

The situation is much worse at Kakowal Junction on the highway. Some power supply cables also touch the ground near a liquor shop there.

A resident of Kakowal Road, Sanjay Sharma, said: “The dangling huge electricity cables are an open invitation to mishaps but the issue is being taken lightly by the department concerned. “I have been witnessing these cables hanging from electric poles for a long time. There is heavy traffic movement on the highway and Kakowal Road is also a busy stretch. For the safety of commuters, the PSPCL must take necessary measures to get the issue resolved,” he said.

MC Councillor from Ward 4 Sukhdev Bawa said the matter of electricity cables was raised before the PSPCL in the past but to no avail. “The dangling big cables in these areas can cause mishaps at any time. If the cables are made underground, which is a challenging procedure,

the people would heave a sigh of relief from the cables,” he said.

“During the regime of the previous Congress government, a plan was also made to reduce the number of cables. I have also submitted an application to the PSPCL to fix loose cables at the earliest”, he said.

On the other hand, PSPCL Executive Engineer JS Jandu said currently, there was no plan to make these wires underground. He said at present, there was no solution to the issue.