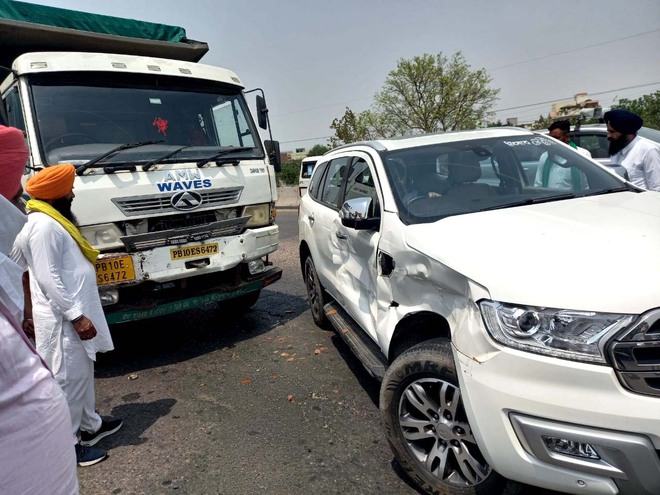 Vehicle of BKU leader Gurnam Singh Chaduni’s cavalcade that met with an accident in Ludhiana on Sunday. Tribune photo

A vehicle in the cavalcade of BKU leader Gurnam Singh Chaduni met with an accident near Jawaddi today.

A truck laden with sand rammed into the Ford Endeavour of retired IGP Iqbal Singh, who was in the cavalcade of the BKU leader.

Vehicle suffered damages, but occupants, including the retired IGP, didn’t suffer any injuries. BKU leader was in another vehicle.

Simran Dhindsa, who manages the IT Cell of the BKU, said several vehicles were heading towards Jawaddi to attend a meeting at a gurdwara. When they reached near the village, a truck loaded with sand coming from the wrong side rammed into the vehicle of the retired IGP.

“All occupants of the car are safe. We have also informed the Dugri police about the incident and details of truck have been shared. It was a minor accident,” said Simran.

Dugri SHO Surinder Chopra said he was unaware of the matter. ASI Jaswinder Singh of Dugri police station said he had sent a PCR team to the spot and the probe was on.