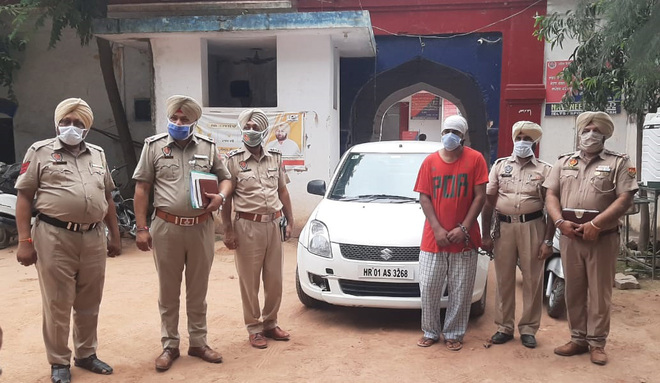 The suspect in the police custody in Payal. Tribune photo

The Payal police along with the support of Doraha and Maloud police teams have solved a carjacking case in which a white Swift car was taken away from a resident of Pathankot by two miscreants near Kashmir Garden here.

One of the suspects identified as Jagdeep Singh alias Neetu has been arrested along with the stolen car. Jagdeep hails from Lasoi village and was wanted in other cases as well. Along with the car, a scooty and a country-made pistol were recovered from him.

Lakhwinder Singh, a resident of Pathankot, was returning from Uttar Pradesh. He parked his car (PB 01A 0356) near a vacant plot near Kashmir Resorts at Doraha. Meanwhile, two unidentified miscreants arrived on a scooty and took away the car pointing a gun at him.

Investigating officer Hardam Singh said, “We got the information that Jagdeep was heading towards Doraha via Gurthali bridge yesterday. A police team along with Lakhwinder stood there at the bridge. The victim recognised the suspect and we lost no time in arresting him.”