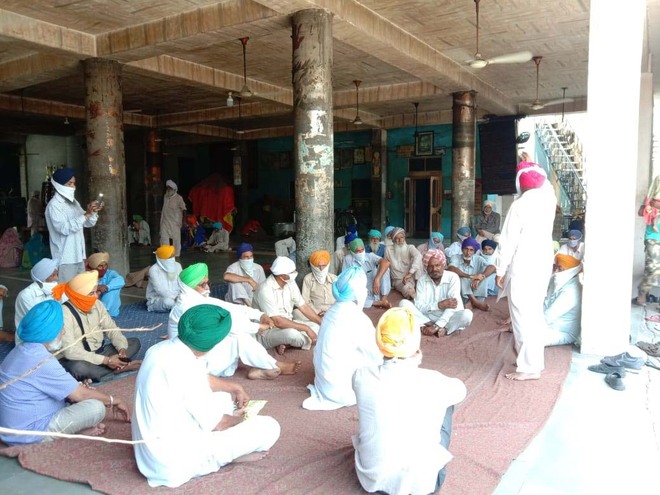 Farmers during a meeting of the Bharti Kisan Union (Ekta) Ugrahan at Ghudani Kalan on Sunday.

The Bharti Kisan Union (Ekta) Ugrahan is all set to protest against the Centre’s recent ordinances on the agriculture sector from July 20. Meetings will be organised, effigies burnt and protest rallies taken out to press the Centre for the withdrawal of its dictatorial ordinances.

It was decided in a meeting of the union that was held under the presidentship of its district president Sadhu Singh Panjeta at Ghudani Kalan.

Saudagar Singh Ghudani, general secretary of the union, told mediapersons that 10 organisations of farmers would hold a strong protest against the three ordinances of the Narendra Modi-led Central Government.

“From July 20 to 26, the farmers will hold protests at the individual village level in which meetings will be held and an effigy of the Central Government would be burnt. On July 27, the organisations will march towards residences of MPs, MLAs and in-charges of the SAD-BJP government and hold protest,” he added.

District president Sadhu Singh Panjeta alleged that the implementation of the Centre’s ordinances was nothing but a cruel joke being played with the already debt-ridden and harassed section of society. It is clear that the Narendra Modi-led Centre is giving a free hand to private corporate houses to exploit the farmers.

Kuldeep Singh Grewal, a member of the union, shared that in this hour of crisis, the government seems to have turned a deaf ear to the increasing Covid-19 cases.

“Though the world is busy fighting the battle against the virus in its own ways, the government is busy in smartly and shrewdly handing over the entire system to private hands,” he said.

The members urged upon all farmer unions of the state, commission agents, labourers and all political parties to support the farmers’ agitation since it is for a common cause and saving the interests of the farming community is the duty of each and every individual of the state. The meeting also flayed the Centre for increasing the rates of diesel and petrol even as the rates of fuel are at the lowest level in the international market.