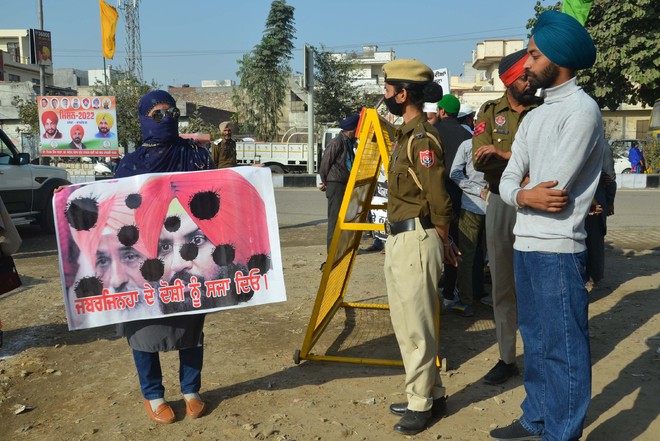 A woman, allegedly raped by LIP chief Simarjit Singh Bains, stands outside the venue of the Congress workers’ meeting.

Auto-rickshaw drivers, who were sitting as usual at Gill Chowk, were taken aback as they saw Chief Minister Charanjit Singh Channi along with Punjab Pradesh Congress Committee president, Navjot Singh Sidhu approaching them.

Channi halted there and listened to the problems of the auto-rickshaw drivers on his way to the grain market to take part in a party workers’ meeting and announced to waive their pending challans.

Channi announced that all the challans which are pending will be waived. He asked the auto-rickshaw drivers to follow traffic rules and work honestly. Channi also acceded to the demand of auto-rickshaw owners to draw a yellow line exclusively for plying of auto-rickshaws.

While addressing party workers meeting, Channi emphasised his government’s commitment to ensure women empowerment. Channi said equal representation would be given to them in the government and as well as in the party fold in the coming days. “Women need their share, they don’t need reservations,” he said.

Taking a dig at Kejriwal, Channi said what does the Mission Punjab of Kejriwal means? Are there not enough Punjabis left that now outsiders will come and rule Punjab? Channi questioned.

Member of Parliament Ravneet Bittu, while addressing the meeting said public had chosen Congress leadership during last elections but the trust of the people was breached by some senior leaders.

“The cords of the senior leaders were connected somewhere else due to which people had to suffer but the change in leadership has shown positive results. Now the CM does not live in a palace but is easily accessible and is on roads in the evening and listen to the grievances of the public. Channi is the leader of the masses,” said Bittu.

Senior Akali leader Sarabjit Kaur Sahoke, who had contested the 2017 Vidhan Sabha elections on the Akali ticket from the Jagraon constituency, Bhupinder Singh Sahoke, SAD halqa in-charge, Nihal Singh Wala, along with their supporters joined the Congress in the presence of the Chief Minister.