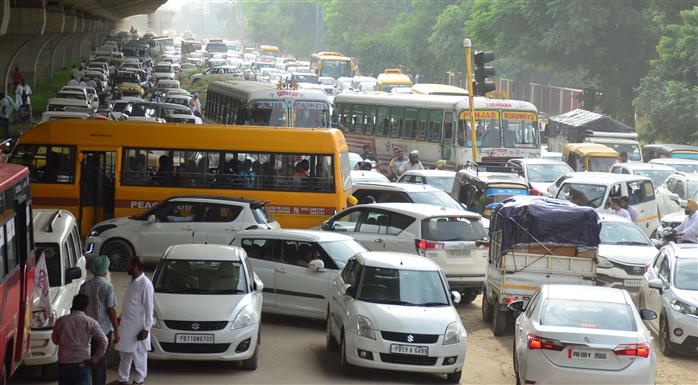 Vehicles stuck in a traffic jam outside the PAU in Ludhiana on Friday.

Vehicular traffic came to a halt in the city today due to the two-day kisan mela that was inaugurated today by Chief Minister Bhagwant Mann at Punjab Agricultural University (PAU). On the one hand, people faced a lot of inconvenience due to the traffic chaos while on the other, those who wanted to go inside the university campus were prohibited as its gates were locked.

There were huge traffic jams on roads today. Ferozepur Road, Pakhowal Road, BRS Nagar road and other roads were jam-packed. Many people who went inside the PAU for the fair parked their vehicles under the flyover, leading to chaos. The situation remained the same till the evening.

“The traffic police should chalk out a proper plan as there is a mess on roads today. I was going to meet my doctor but got late due to the jam,” said Aarti, a commuter.

People from different walks of lives today faced a difficult situation due to the fair.

A district-level sports tournament of the CBSE was scheduled inside the PAU but students, who were standing outside since 9:30 am, were not allowed to go inside till afternoon.

“We came here for the tournament but all gates of the university are closed and we are not allowed to enter. Somebody asked us to go to gate number one, then gate number 2 and so on. Some students are inside and some are waiting outside. We got no intimation from the authorities regarding the entry to the PAU. Tomorrow, I have an exam and I am standing here. There will be no time left for exam preparation,” said a student.

The situation on the campus was no different. When the Chief Minister was present inside, no vehicle was allowed to move and entry was restricted near the pandal.

“I have to go to my department but the police are not allowing me. I have showed them my identity card but still they did not allow my entry and asked me to park the vehicle and go on foot, which is very difficult due to the long distance,” said a PAU employee.

On the one hand, people faced a lot of inconvenience due to the traffic chaos on roads while on the other, those who wanted to go inside the PAU campus were prohibited as its gates were locked.