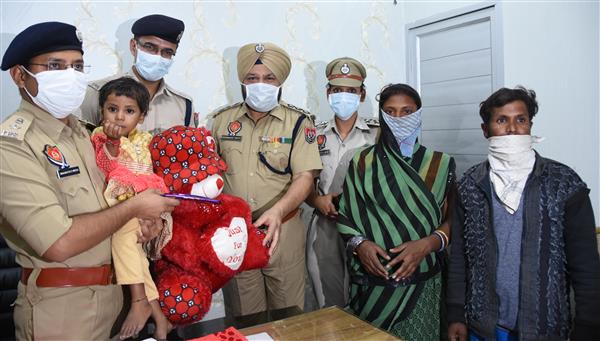 Police officials handing over the recovered child to the parents at Jodhewal police station in Ludhiana on Sunday.

The Basti Jodhewal police claimed to have solved a kidnapping case of a two-year-old girl child within 24 hours of the incident. Senior officials supervised the probe. The police arrested Raghwinder Kumar (26) of UP, at present staying in New Kailash Nagar. He is working at a factory.

Basti Jodhewal SHO Arshdeep Kaur said yesterday Matadin Ahirwar, a native of MP, at present staying on the Kailash Nagar road, complained that his daughter was playing outside the house when a cyclist kidnapped her.

The SHO said 10 teams were formed under the supervision of ADCP 1 Deepak Pareek. Over 250 persons were questioned and footage of CCTV cameras were checked. Vehras (a place where migrants live) were also searched. Technical probe of the police led them to the house of the suspect in New Kailash Nagar from where he, along with the baby girl, was recovered.

The suspect said he had kidnapped the baby as he wanted a daughter. When he got married, his wife gave birth to a girl child, Sonam, but she died at the age of 18 months. After the death of the child, his wife left him. He said he got married again and his wife gave birth to baby boy. During the pregnancy, the woman suffered a miscarriage. To fulfil the wish of having a daughter, he kidnapped the child. But he was nabbed by the police. — TNS