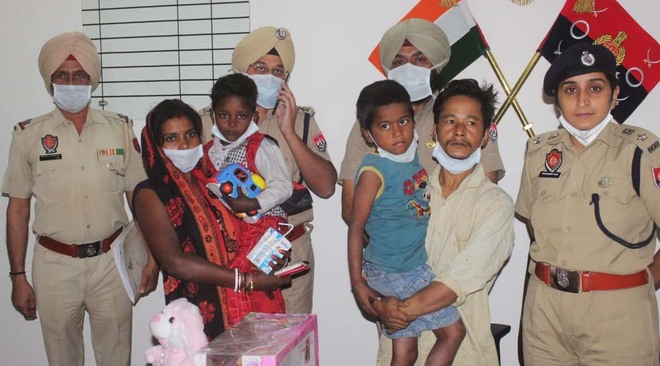 Police officials with parents of recovered children in Ludhiana on Monday. Tribune photo

The city police today claimed to have busted a gang of child lifters with the arrest of the mastermind of the gang, Krishna, son of Bhagat Singh, a native of Jaunpur in Uttar Pradesh, and presently residing behind Baba Jaswant Singh Dental College, Moti Nagar here.

The arrest was made from the Sherpur market on the outskirts of the city. Two abducted kids, Munish Kumar (4 years, 6 months) and Golu (8 years) who were missing from different parts of the city since October 11 and 13, respectively, were recovered from the custody of the accused.

Giving more information, Joint Commissioner of Police (Rural) Kanwardeep Kaur said in an online news conference that Munish was reported missing by his father Sonu Kumar, a resident of Mahaveer Colony in Bhamian Khurd while playing near his house on October 11 and a case under Sections 346 of the IPC was registered in this regard at the Jamalpur police station.

She said with the arrest and preliminary investigation of the accused, who had confessed to abducting the children and make them beg or collect trash, at least three cases, involving five missing children, had been solved.

On the modus operandi of the child lifter, she said, the accused used to sell fire crackers on his “rickshaw rehra” and would lure the kids by offering them fire crackers for free. After abduction, the kids were forced to beg at public places or sent to collect trash from residential areas.

The JCP further said that the case of the abduction of Golu (recovered today) along with Vikas (4 yrs) was registered on October 13 at Focal Point, while two other cases of missing Vikram (9 yrs), besides Suraj (10 yrs) and Karan (10 yrs) were also registered at the Focal Point police station on September 22, 2019, and October 6, 2019, respectively. These abducted kids had, however, managed to escape from the custody of the kidnapper and had reached their respective homes,

Adding that at least two victims had identified the accused as their kidnapper, Kanwardeep Kaur said in the case of the kidnapping of Munish Kumar, Sections 363/370 of the IPC and Section 74 of the Juvenile Act were added against the accused and further interrogation was on.