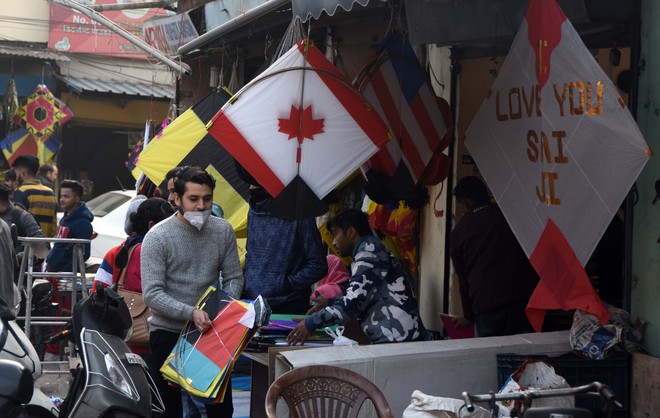 People purchase kites and thread on the eve of Lohri in Ludhiana. Photo: Ashwani Dhiman

Despite the Ludhiana police claimed complete strictness over the sale of banned Chinese plastic string, it is being sold by some sellers with impunity.

The Tribune team conducted a sting operation to prove the fact that the string is commonly available. The new thing found in the sting operation is that now kite sellers have not kept the stock of the string at their shops as the police have been conducting surprise checking at these places, instead, they have kept the same at secret godowns and other isolates places.

The sellers have now employed young boys to deliver the string at specified places.

The Tribune correspondent, acting as a customer, made a WhatsApp call to one of the sellers (name withheld) to buy the banned string. Initially, the seller denied having its stock due to the ban but when he was given the reference of his friend, he agreed. The seller said his boy would call him to fix the delivery point and asked for Rs 700 for each roll (gattu), along with Rs 100, for delivery.

After one hour, a boy made a WhatsApp call and asked to reach at Daresi. When the correspondent reached the place, the caller entered a street and after identification, handed over two rolls of the banned string. He took Rs 1,400 for two rolls along with delivery fee of Rs 100.

The delivery boy came on a white Honda Activa scooter.

When the boy was asked if he feared the police, he categorically said: “Don’t worry about the police, we have setting with some police personnel. If you require more rolls just give a call, I will deliver on your doorstep,” adding that he had to make other deliveries, hence, he had to rush as huge orders were being received due to Lohri.”

It is learnt that many students or other youngsters have started the illegal trade due to its high profit margin. A box of gattu contains 48 rolls which cost around Rs 8,500 and a retailer can easily sell the same on a two or three-time margin.

Police Commissioner Rakesh Agrawal said flying kites with the Chinese string now also invite an FIR under the Wildlife Act and the Environment Protection Act and the police will enforce the law strictly.

No major recovery by police so far

Sources said in the action taken by the police against the plastic string so far, around 2,000 rolls have been recovered from over 50 persons. Accused sellers are being given bail at police stations due to the cases being registered under bailable sections. So far, the police have not found any godown or place where these sellers have kept a huge stock of the banned string.

Have enough stock of gattu for Lohri: Kite lovers

Talking to The Tribune, young kite lovers said they had gathered enough stock of Chinese rolls to enjoy kite flying on Lohri. When asked if they are aware about the ban, they said they were aware but without the string they could not enjoy kite flying as their kite would be cut easily.