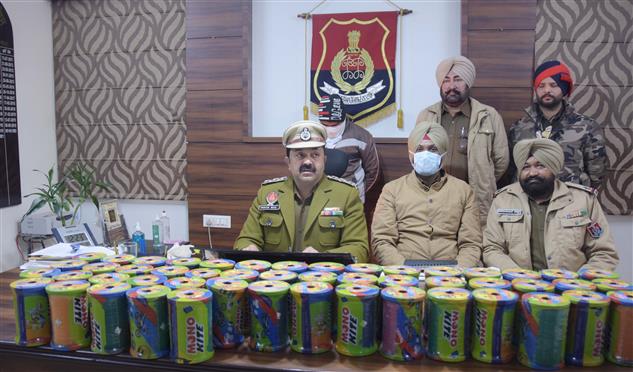 ACP Harish Behl addresses a press conference regarding the arrest of a supplier of banned Chinese string in Ludhiana. Ashwani Dhiman

The bus stand police post busted a racket of sale of banned Chinese string and arrested a man. The police recovered 50 rolls of banned string from him.

The arrested man has been identified as Himmat Kumar, alias Rohit, resident of City Enclave colony, Dhandra road. His accomplice, Neeraj, managed to give the police the slip.

ACP Behl said secret information was received that Himmat and Neeraj were running an illegal business of Chinese string and they were on the way to deliver a huge stock of banned string to their clients. Accordingly the police party laid a naka near the bus stand and stopped the Innova car in which Himmat and Neeraj were travelling.

“When the police party stopped the car, Himmat was nabbed, while his accomplice Neeraj managed to give the police party the slip. Later when the car was checked, 50 rolls of Chinese string were seized,” added ACP Behl.

The ACP appealed to people that due to the use of banned Chinese string, many people had suffered injuries and people should avoid its use to save the human as well as birds’ lives.