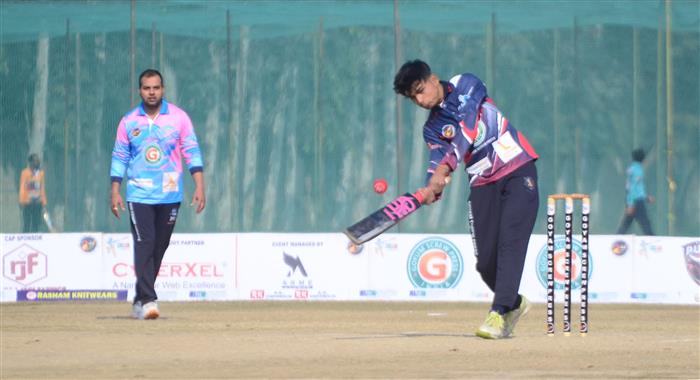 Players in action during a match at the RJPL Rasham Cricket League in Ludhiana on Sunday. Photo: Ashwani Dhiman

Chinmay Super Kings XI and GNH United XI began their campaign on a winning note in the 4th RJPL Rasham Cricket League being organised by the Jain and Aggarwal Welfare Society at GRD Global Education Institute ground on Hambran Road here on Sunday.

In the first match of the eight-day league, batting first, Jainsons Champions scored 137 runs for the loss of one wicket in 12 overs. Rahul Gupta top scored with 78 runs which came off 40 balls with the help of eight boundaries and five sixes. Vikram chipped in with 42 runs.

After surviving many anxious moments, Chinmay Super Kings XI managed to achieve the target on the penultimate ball of the match with last pair at the crease. Honey Mittal remained unbeaten on 45 runs, while Nitish Jain and Ashu Jain contributed 18 runs each.

In the second match, Goyum Rising Stars XI made 162 runs after losing five wickets and GNH United XI surpassed the total in 10.3 overs with eight wickets in hand. Jaish Jain and Deepak Bansal scored 78 and 61 runs, respectively, for the winning side.

The third match was played between V Jain Fraggers XI (109 for 3) and Bistro Knight Riders XI 107 for 5) in which the former came out triumphant by seven wickets.