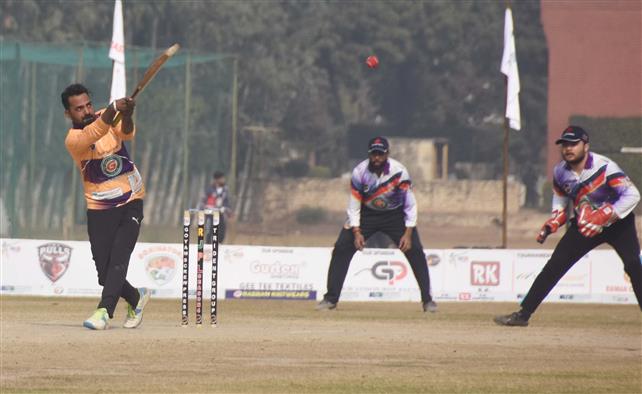 A match in progress during the 4th RJPL Rasham Cricket League in Ludhiana on Monday. Photo: ashwani Dhiman

Yesterday, Chinmey Super Kings had defeated Jainsons Champions by one wicket on the second last ball of the match to register a thrilling victory.

M Jain Super Kings XI made 90 runs after losing eight wickets in the stipulated 12 overs in which the main scorer was Sanchit Jain who contributed 26 runs.

SM Hero XI achieved the target for the loss of six wickets with five balls to spare. The main architects of their innings were Anshul Jain and Aniket Jain who scored 39 and 30 runs, respectively.

In another match, Bistro Knight Riders XI proved too good for C Mohan Crease Masters XI whom they beat by 64 runs.

In reply to Bistro Knight Riders’ total of 189 for 4 (Kushal Kheetan 115 off 43 balls), C Mohan Crease Masters XI could muster 125 runs after losing six wickets. For the losing side, Karan Singla and Sobit Jain chipped in with 51 and 27 runs, respectively.

In the fourth match, GNH United XI outplayed Ridge Man Rangers by six wickets to record their second win in a row.

Ridge Man Rangers scored 144 runs for the loss of five wickets and GNH United XI made the required runs in 10.5 overs after losing four wickets. For the winning side, Deepak Bansal made 51 runs off 29 balls and Deepak Singla scored 31 runs off only nine deliveries that included three hits over the ropes and as many sixes.

In the fifth match of the day, Rohit hit 116 runs off 40 balls, with the help of 13 sixes and six boundaries to enable CMA Bulls XI beat Goyum Rising Stars XI by seven wickets.