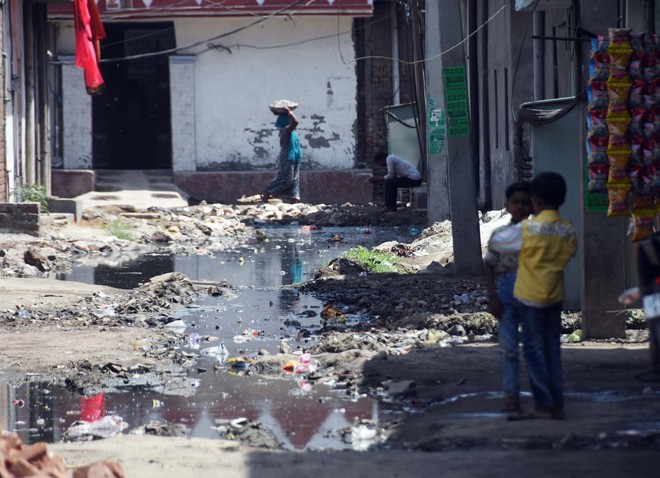 After the death of two children suspected to be suffering from dengue, a team of the Health Department in October 2019 conducted a survey at New Durga Colony in Ward 28. The street, leading to the houses of both children, was badly flooded with sewage due to overflowing sewers.

After the survey, the Health Department team, however, did not confirm any dengue death. But, they had confirmed to have found a huge amount of larvae of culex mosquitoes, which can spread Japanese encephalitis (an infection of the brain), in stagnant sewer water on roads and vacant plots of New Durga Colony and nearby areas.

Even after the passing of more than two years, the MC failed to resolve the problem as the sewers are still overflowing in New Durga Colony, Ishwar Colony and some nearby areas, giving an open invitation to diseases. The residents blamed the MC and its ‘poor’ sewer system for such ‘hell-like’ conditions.

Surinder Singh of New Durga Colony, said, “Thousands of residents are forced to live under unsanitary conditions. Nothing has been done to provide us with any relief. The people are forced to pass through accumulated sewage in the streets and they generally suffer from health problems, including skin infections.”

Sukhwinder Singh of the Guru Ravidas Ji Youth Sports and Welfare Club said, “In the morning, the sewers commonly overflow on Dharmashala Road at Dhandari Khurd.” The residents also accused the MC of failing to pay attention to the accumulation of dirty water in a park outside Metro Tyres at Dhandari Khurd.

The overflowing sewage is getting accumulated in several vacant plots and roads in the Ward 2 and 3 areas. Congress councillor from Ward 3 Pallavi Vinayak said, “A sewerage disposal unit was set up in a wrong manner during the tenure of the previous SAD-BJP government. Whenever the disposal is run, the sewers overflow in a few areas, including Inder Vihar and Basant Vihar Extension. Thus, we have requested the officials to run the disposal unit at night to avoid water accumulation in these areas at daytime.”

Shiromani Akali Dal (SAD) councillor from Ward 2 Gurmail Singh Jajji blamed the MC for keeping the disposal unit off due to which the sewers overflow at Saryansh Nagar, Deep Colony and a few other colonies in Ward 2. He claimed the disposal unit was functioning well during the tenure of the previous government.

When contacted, MLA from Ludhiana East Sanjay Talwar said, “There are sewer-related issues in Ward 2, 3, 12, 15 and 21. A work to clean the Bhattian sewer line is already underway. We are hopeful that once the work is completed, the problem of overflowing sewers will get resolved. For a permanent solution in Ward 2 and 3, there is a plan for installation of a new sewer line.”

Choked and overflowing sewers are also common in several areas in Ward 30 and nearby wards. RK Yadav of the Yadav Ahir Mahasabha said, “The sewage is getting accumulated at Mini Rose Garden at Giaspura and the problem must be resolved.” The residents also complained of choked sewers in flats at Giaspura in Ward 31.

Davinder Singh Sherpuri, AAP leader, said, “The problem of overflowing sewers on Gurdwara Sahib Road and a few other roads in the Sherpur area should be resolved at the earliest.”

Meanwhile, councillor from Ward 94, Gurpreet Singh, “I appreciate the work being done by the sewer men. But, the MC must ensure de-silting of the sewer lines with super suction machines on Jassian Road.”

Whenever it rains, the sewers start overflowing on Chandigarh Road, Panj Peer Road and a number of other areas.