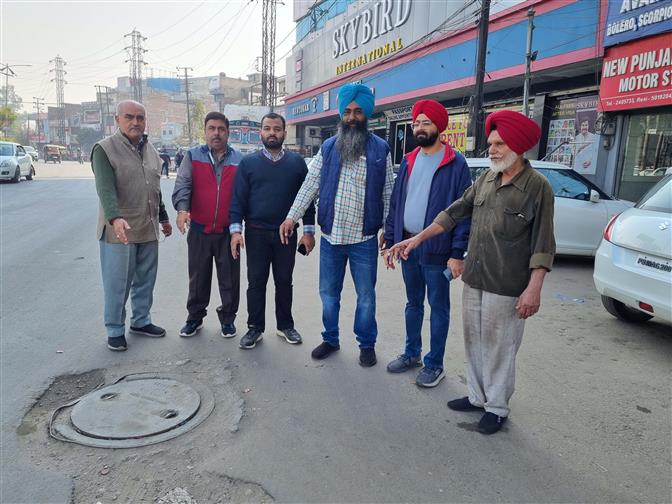 With the Ludhiana Municipal Corporation allegedly failed to resolve the recurrent problem of a choked sewerage system, shopkeepers of the market just opposite Preet Palace on Link Road have complained to Chief Minister Bhagwant Mann, the Local Government and the civic body authorities as well, seeking immediate resolution of the issue. They demanded the cleaning of the choked sewerage line immediately with a super suction machine.

Sharing their concern, a group of shopkeepers said the main sewerage line remained choked and it often overflowed too. Also, sewage usually flowed back to the toilets on their premises.

Owner of an auto agency near Hotel Chevron, Arun said, “In the letters written to the Chief Minister, the Principal Secretary, Local Government, the Chief Secretary, Punjab, and the MC Commissioner and other officials concerned, we highlighted the requirement of getting the entire sewer lane thoroughly cleaned urgently by using a super suction machine. The shopkeepers and inhabitants have been facing a lot of troubles due to the blockage of the sewerage line, continuously at regular intervals, for the last few years, in a posh area on Link Road.”

He said, “The choked sewerage system creates problems for us and it starts reverting sewage, emanating a foul smell. We have made repeated verbal and written complaints to the civic body officials here, but these yielded no results. The officials did not take the complaints seriously to find out a permanent solution. Thus, we have now requested the CM and higher government officials to get the problem resolved at the earliest.”

MC Superintending Engineer (O&M Branch) Ravinder Garg could not be contacted for his comments.

The shopkeepers alleged there was complete laxity on the part of MC officials in getting the sewerage line thoroughly cleaned from Dugri Chowk to Gian Singh Rarewala Market Chowk on Link Road Ludhiana despite numerous verbal and written requests.