Broken covers of drains not replaced for long, pose threat to commuters on NH-44 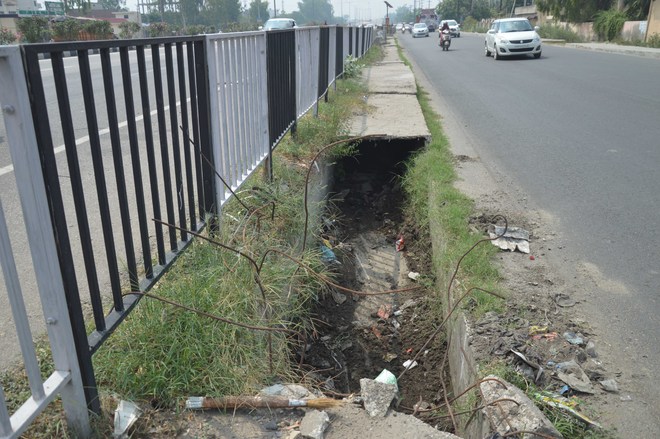 The authorities concerned should take steps to ensure cleaning of choked storm water drains to prevent waterlogging on the NH-44. Photo: Inderjeet Verma

Though monsoon is round the corner, storm water drains choked with garbage on Ludhiana-Delhi Road (National Highway-44) are yet to be cleaned.

Several covers on the drains on both sides of the highway have been lying broken for a long time. Whenever it rains heavily, waterlogging is witnessed at various points on the highway due to the choked drains. However, the authorities concerned are yet to take concrete measures in this regard.

During the rainy season in 2019, waterlogging was witnessed in several areas, including Jalandhar Bypass, near Tiger Safari cut, near Jodhewal Basti Chowk, Dhandari and other points, on the NH-44. The storm water drains have filled with waste near the Jalandhar Bypass, Karabara Chowk, Jodhewal Basti and other points. The water generally accumulates in some of the underpasses on the highway too during the downpour.

“We have been witnessing the broken covers of choked drains near the Jalandhar Bypass for a long time. When water gets accumulated on the stretch, chances of mishaps remain high. Sometimes, vehicles develop snag while passing over the flooded stretch. The authorities should take measures to ensure cleaning of the choked drains to avoid waterlogging on the highway,” said Amarjit Singh of Aman Nagar, near Jalandhar Bypass.

Ramesh Srivastav of Samaj Sewa Society said: “Toll tax is collected from thousands of commuters on the NH-44. It is the responsibility of the government as well as the authorities concerned to ensure provision of well-constructed roads. They must ensure that no waterlogging occurs on these roads during rain. The choked drains on Ludhiana-Delhi Road and other highways should be cleaned and made properly functional at the earliest.”

NHAI project director for the NH-44 Yogesh Chandra said they had already given directions to the firm concerned, ‘Roadis’, to ensure cleaning of the storm water drains on the highway. If the drain covers are broken, the company is responsible to replace the covers.

Besides, there is a need to clear the choked storm water drains on Ferozepur Road too. Waterlogging during downpour was also witnessed on different points of Ferozepur Road last year as the drains were not functioning properly. At present, the elevated road project is underway at Ferozepur Road here.

Authorities yet to take Concrete measures

Whenever it rains heavily, various points on the NH-44 get waterlogged due to the choked drains. However, the authorities concerned are yet to take concrete measures in this regard. During the rainy season in 2019, waterlogging was witnessed in several localities near Jalandhar Bypass, Tiger Safari cut, Jodhewal Basti Chowk, Dhandari and other areas along the highway.