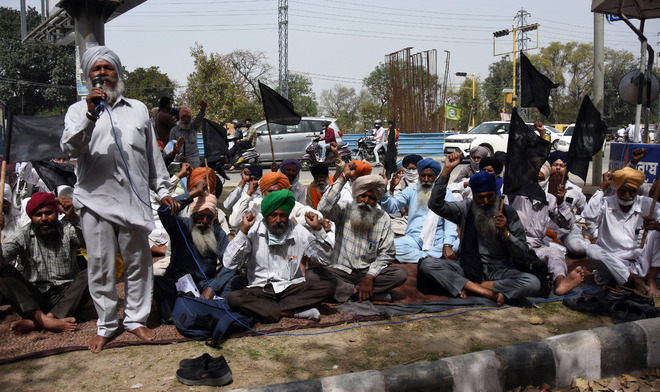 Chowkidars stage a protest outside the DC’s office in Ludhiana. Photo: Ashwani Dhiman

Chowkidars from different parts of the district staged a protest outside the DC’s office in Ludhiana today. Members of the Lal Jhanda Pendu Chowkidara Union blamed the state government for not providing dearness allowance of Rs2,500 per month as promised to them. The protestors claimed that they get mere Rs 1,250 allowance at present.

They said they don’t get any salary except the little allowance but they are forced to do a lot of works related to different departments of the government in routine. Paramjit Singh Neelon, president of the union, said, “We belong to economically-weaker section but the state government has not increased our dearness allowance. Before 2017 assembly elections, Congress leaders had made a promise with us that Rs2,500 per month dearness allowance will be paid to chowkidars, if Congress forms government in the state. We earlier also used to make birth and death record in villages but the government later stopped us from doing the same.”

“We had met Revenue Minister Gurpreet Singh Kangar on March 5 regarding our demands. We were assured that the chowkidars will be given Rs 2,500 dearness allowance per month, uniform and cycle soon. But, no announcement was made during the Budget to increase our allowance”, he added. Devi Das Miani of the union said, “When any demarcation work is done by the Revenue Department, we are asked to visit site. In case the police have to visit anyone’s home or summon is to be given to any person, we are asked to go with them. We mark duties of villagers for night patrolling but there is no salary for us.”

They also demanded free health insurance cover so that they and their families can get free treatment. They also demand old age pension of Rs 3,000 per month. They warned that if their demands are not met, they will hold rallies in all constituencies against the government before 2022 assembly elections.