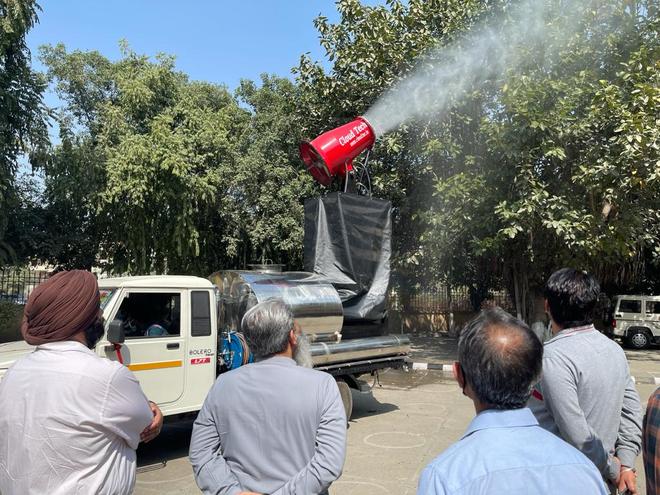 To reduce the rising air pollution level in the city, the Municipal Corporation (MC) has bought anti-smog machines.

Ashu said for providing clean and fresh air to residents, such anti-smog and anti-dust machines would be deputed at several areas in the city.

He said the machines were bought by the MC under the National Clean Air Programme (NCAP), which would help in settling down suspended dust and pollution causing particles.

The minister inspected the demonstration of two different machines, which included one mounted on an electric vehicle and the other on a Mahindra Bolero vehicle.

He said these machines could be put to various uses such as washing dust off leaves of long trees, for sterilisation and for keeping a check on suspended dust and pollution-causing particles.

Ashu said air pollution was one of the biggest problems for residents in the city. Hence, all stakeholders must play a proactive role for the successful implementation of the clean air mission for the industrial hub of the state, which would pave the way towards the improvement of quality of air and in the process, help residents to get rid of air pollution, causing adverse effect on their health and lives.

The demonstration of machines was held to deliberate on issues related to control of air pollution in the city and to discuss various aspects of the NCAP and the Centre’s scheme for improvement of air quality of 42 million plus urban cities as per the recommendations of the 15th Finance Commission.

The minister informed the stakeholder departments that the city was one of the nine non-attainment cities in the state and air quality management plan and action required as per action plan has already been approved by the Central Pollution Control Board (CPCB).

The action plan involves stakeholders such as Municipal Corporation, departments of Transport, Police, Forests, Industries and Commerce, PWD, PSCST and Agriculture and the district administration, who have been assigned their different responsibilities in the field.