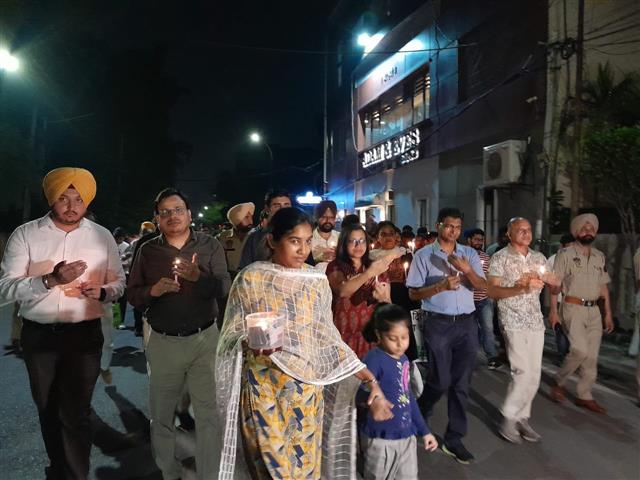 On the occasion of the 115th birth anniversary of Shaheed-e-Azam Sardar Bhagat Singh, a candle march was taken out from the main gate of Satish Chander Dhawan (SCD) Government College to Nehru Rose Garden on Wednesday evening. The candle march was organised by the district administration.

They further said under the guidelines issued by the government, special attention would be given to eradicate drug menace and provide better administrative services.

Meanwhile, MLA from Ludhiana East Daljeet Singh Grewal (Bhola) also paid tributes to the statues of martyrs at Jagraon Bridge. MLA Bhola said the country will always remember Shaheed Bhagat Singh’s sacrifice and salute his patriotic spirit. He said eradicating corruption, drug menace, female foeticide, illiteracy and other social evils from society will be a true tribute to the martyrs.

A cycle rally was organised at SCD Government College, Ludhiana, to commemorate the 115th birth anniversary of Bhagat Singh. More than 1000 students participated in the rally.

The Youth Club, NSS, NCC and Red Cross Society of Government College for Girls organised a programme to commemorate the day. A blood donation camp was also held on the college premises.

Paying tributes to the martyr, the birth anniversary of Shaheed Bhagat Singh was celebrated today in government as well as private schools in patriotic fervour. Various kinds of activities telling about the importance of the martyr’s sacrifices were organised in schools, including slogan writing, essay writing and painting competitions.