With an AQI reading of 256 on Friday, Ludhiana remains most polluted city in state 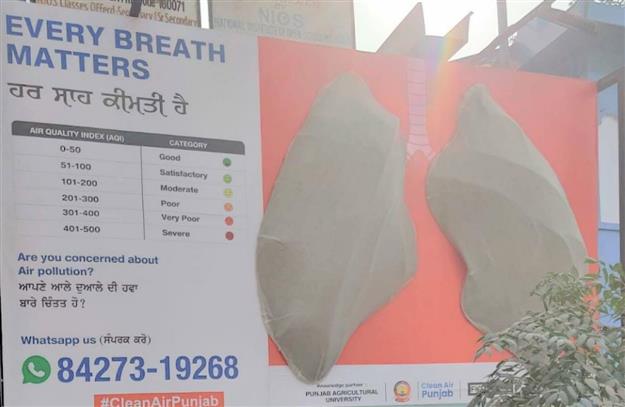 The ‘lungs’ have been put up outside BCM Arya Model Senior Secondary School in Shastri Nagar.

It took a period of only nine days for the giant pair of faux lungs installed at a busy junction of the city to turn dark black from chalk white, highlighting the deteriorating air quality in Ludhiana. 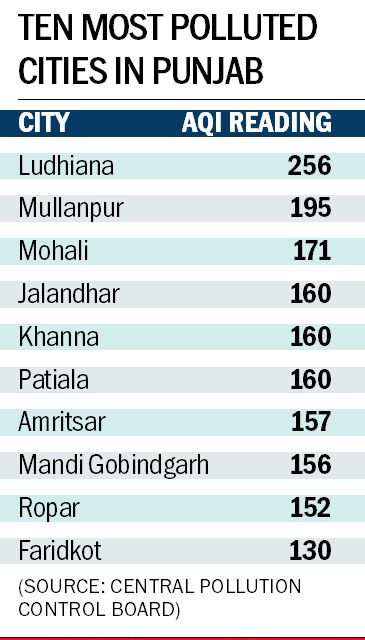 The ‘billboard that breathes’ lungs have been created using HEPA (High Efficiency Particulate Air) filters. These filters are used inside operation theatres, anti-pollution masks and other places to trap dust. The lungs have also been fitted with fans that suck in air to mimic the functioning of lungs while breathing. The particulate matter from dust pollution and vehicular emissions gets trapped in HEPA filters, changing the colour of the lungs — from chalk-white to brown to black. Notably, the entire transition took place in just nine days in Ludhiana.

The billboard is a part of a campaign initiated by Clean Air Punjab, along with EcoSikh, BCM Arya Model Senior Secondary School and Punjab Agricultural University (PAU), to raise awareness about the worsening air quality in the Malwa belt of the state.

Titled ‘The billboard that breathes’, these ‘artificial’ lungs were put up outside BCM Arya Model Senior Secondary School in Shastri Nagar on November 30.

According to Gurpreet Kaur, the campaign manager of EcoSikh, the lungs turning black within a week should be an eye-opener for all to imagine what was happening to human lungs.

“We are aware of the deteriorating air quality in Ludhiana. We expect that efforts will be made by the government and the public to lower pollution levels, because the health of many is at stake due to the toxic air,” she said.

City resident Anju Chhabra, who visited the site on Friday, called it one of the best ways to depict the health impacts of air pollution to create mass awareness.

Calling access to clean air a fundamental human right, which the children were being denied of, Samita Kaur, a member of the Warrior Moms NGO, said the greying of lungs put up in the city was an evidence of toxicity in the air.

Dr Akashdeep, senior pulmonologist at DMCH, said using the ‘breathing lungs’ turning black to represent the damage caused by hazardous particles that were being deposited in human lungs to demonstrate how pollution was damaging people’s lungs was a smart idea.

“The number of people expressing complaints of shortness of breath, a persistent and recurrent cough, chronic bronchitis, obstructive airway disease, rhinitis, cancer, cardiovascular disease and high blood pressure is related with the amount of pollution,” he said.

Dr Amandeep Bains said: “The litmus test regarding the condition of air in Ludhiana came out to be positive. Lungs installed before BCM turned black within a week that too when they were installed in that area of the city which is away from factories and major roads. This is an emergency which is not being acknowledged because of the vested interests of a few.”

A similar pair of lungs installed in Mumbai in January 2020 took 14 days to go black, while the one installed at Delhi in November 2018 had taken just six days to turn black. This shows that Ludhiana’s air quality was better than Delhi but and worse than Mumbai, at least for those periods when the experiment was done in those cities.

On Friday, Ludhiana was once again ranked the most polluted city in the state with an air quality index (AQI) reading of 256, which was considered “poor”, with the PM2.5 remaining the prominent pollutant, causing breathing discomfort to most people on prolonged exposure. Among the ten most polluted cities in the state on Friday, three were from Ludhiana district — Ludhiana, Mullanpur and Khanna.