A majority of buildings lack rainwater harvesting structures in city; no check on violations of building by-laws 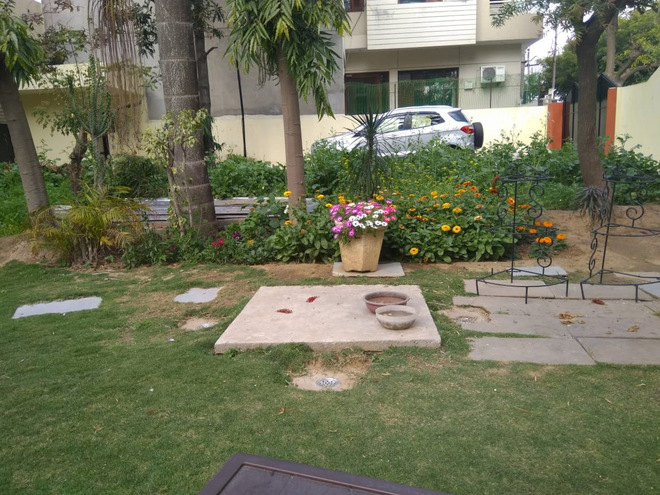 A tank for the rainwater harvesting system at a residence in Ludhiana. Tribune photo

When the depleting groundwater is a major concern in the city, a majority of new buildings are coming up without the provision of a rainwater harvesting (RWH) system. But, there is no proper check on such violations in the city.

As per the Punjab Municipal Building Bye-Laws 2018, all buildings having a plot size of 100 sq m or more, while submitting building plans for sanction, shall mandatorily include the complete proposal of the rainwater harvesting system.

A source in the MC, however, said about 90 per cent of the buildings for residential, commercial, industrial and other purposes lack rainwater harvesting structures.

The MC collects up to Rs 50,000 (depending upon the size of a plot) as security charges whenever a building plan is submitted to the civic body for required approval. If the rainwater harvesting system is set up in a building, the building owner concerned can apply for a refund of security charges. It has come to light that many plot owners, who deposited such security charges, had later not made any claim to have set up the RWH.

A senior officer of the MC said around 5,000 plot owners had deposited security fee for rainwater harvesting at the time of submission of the building plan for sanction to the MC, Ludhiana, in recent years but only a few applied for a refund of these charges. Sources said there were high chances that a majority of the plot owners had not got the rain harvesting system set up. Besides, a number of buildings had been constructed even without getting any building plan approved from the MC, the sources said.

Notably, a huge amount of rainwater is generally released into sewer lines in the city. In the building by-laws, two main techniques of rainwater harvesting — storage of rainwater on surface for future use and recharge to groundwater — have been mentioned.

Col CM Lakhanpal (retd) said: “I have got a rainwater harvesting system installed at my home for ground water recharging. The RWH structure is not costly. All building owners should be encouraged to get the RWH system installed in their buildings.”

Sanjay Goel, chairman of the Indian Institute of Architects, Punjab chapter, said: “It is observed that a majority of buildings lack the rainwater harvesting system. In a city like Ludhiana, the underground water table is already low and going further down. Rainwater harvesting everywhere is a must. The government must be strict in getting it implemented by owners in their buildings.”

Earlier, it was planned to set up a rainwater harvesting system at MC’s zonal offices but to no avail. Many government buildings, industries, commercial units and other buildings also lack such system.

Municipal Town Planner of the MC, Ludhiana, SS Bindra said when a building plan was submitted to the MC by the plot owner concerned, the charges for the RWH are also collected.

On the other hand, Superintending Engineer of the MC’s O&M branch, Rajinder Singh, said the MC’s building branch had not written to the O&M branch to conduct any kind of checking about the provision of rainwater harvesting in buildings.