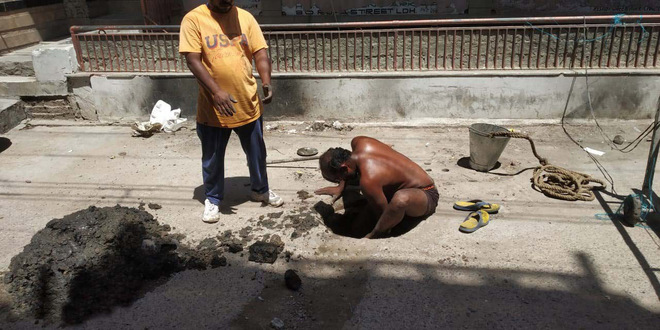 Sewermen are generally seen working without any safety gear in various parts of the city. File photo

To ensure the safety of sewermen, the Municipal Corporation (MC) has decided to purchase safety gear worth Rs2.45 crore for them. The sewermen were generally seen working without safety gear in various parts of the city.

In the past, some of them had died due to asphyxiation while cleaning sewer chambers in the city. Safety gear is essential for them as they have been working as frontline warriors amid the pandemic.

The MC has floated the tenders to purchase the equipment. The civic body will purchase 58 airline breathing apparatus sets and 115 chin-type gas masks for the sewermen.

The MC will also purchase 58 gas detectors that would be capable of measuring gases in the sewer chambers. Several sewermen had died or fallen seriously ill after inhaling gases in the sewer chambers during the past years. Besides, the MC would purchase 58 tripod sets, 58 nylon rope ladders, and 58 fume exhausters-cum-air blowers for sewer-related tasks.

At present, the MC has just a few safety gear for the sewermen and there was a need to buy more equipment, an official said.

Moreover, the MC authorities have also decided to purchase PPE kits for the sewermen. The MC will purchase 1,641 reflecting jackets with fluorescent strips and the same number of safety helmets, normal face masks, hand gloves, safety gumboots, and safety body clothing for the sewer men.

MC’s Superintending Engineer Rajinder Singh said the tenders had been floated. Technical bids would be opened on May 18. Once the tendering process was completed, the successful bidder would have to deliver these items within one month.