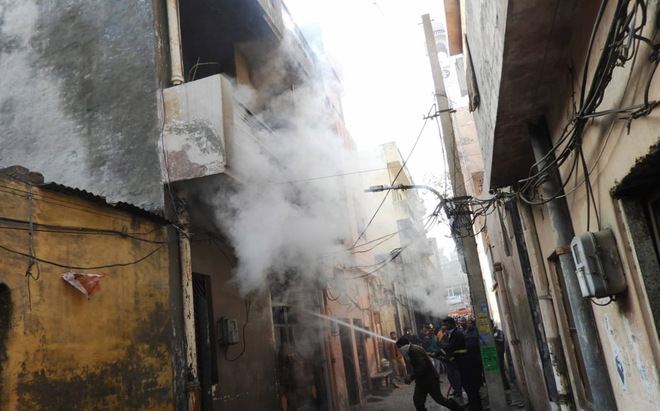 Firemen try to douse the flames at the house in Janakpuri.

A major fire broke out in a house in Janakpuri here on Wednesday morning. Four children who were present in the house had a miraculous escape.

They got stuck in the house. A neighbour broke the door and entered the house and took the children out of the house safely.

Anu, the mother of the children, said she had gone to market while her husband went to Chandigarh today and their four children were present at home.

She said when she reached home, she was shocked to see that the ground floor of the house was destroyed in the fire but her children were safe as they were saved by her neighbour.

She said furniture, clothes, cash and some other valuables were burnt in the fire.

As per firemen, the incident took place at around 10.30 am. When they reached the spot, they broke open the door and started dousing the flames.They said the fire spread to the ground floor and it was controlled in one hour. About the cause of the fire, the officials said a blast seemed to have occurred in the gas geyser.