Inaugurates kisan and pashu palan mela, being held after 2 yrs 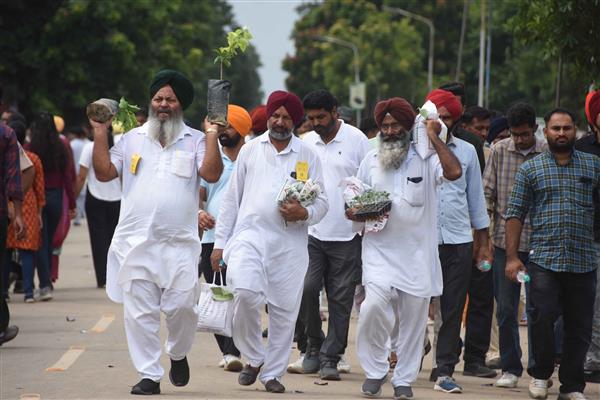 Farmers carry saplings on the first day of the kisan mela at Panjab Agricultural University in Ludhiana on Friday. Photo: Ashwani Dhiman

Roads of Punjab Agricultural University (PAU) were clogged with fleet of cars and swarms of farmers, who came along with their families to attend kisan mela and pashu palan mela, being held after a gap of two years.

Inaugurating the mela, chief guest Bhagwant Mann, Chief Minister of Punjab, said, “This is a historic mela. I have been coming to this mela when nobody knew me. I have come here as an artist. Now, I am here as Chief Minister.”

The Chief Minister (CM) also called on farmers to reduce expenditure on marriages as it was a huge economic burden on families of brides and groomes. Marriages must be solemnised in a simple way, the CM said. He reiterated commitment of his government to make Punjab a drug-free state.

An earnest endeavour by the College of Fisheries was the stall, which displayed various types of fish, duckweed cultivation and integration of fish farming with other livestock farming. People inquired about fisheries profession, ornamental fish and saline water fisheries. Value added products of the college were also displayed on their stall for sale.

Farmers not allowed to enter pandal

After Chief Minister Bhagwant Mann entered the main venue of the mela, nobody was allowed to enter pandal. Satkar Singh from Mansa said, “I came all the way to listen to the CM. Now, I am told that I cannot enter pandal.” Another farmer said what kind of aam aadmi was the CM as farmers, who were common men, were not allowed to enter the venue.

While CM Bhagwant Mann was addressing gathering at mela venue from stage, a few farmers were waiting near pandal carrying placards and urging the government to legalise farming of poppy husk. Gurjit Kaur from Fatehgarh Sahib district said during elections AAP had promised to legalise farming of poppy husk but nothing had been done till date. “I have seen my near and dear ones losing their lives to drugs. Legalising of poppy husk farming will save youth, who are getting hooked to synthetic drugs. Opium and poppy husk don’t harm body as other drugs do,” she said.