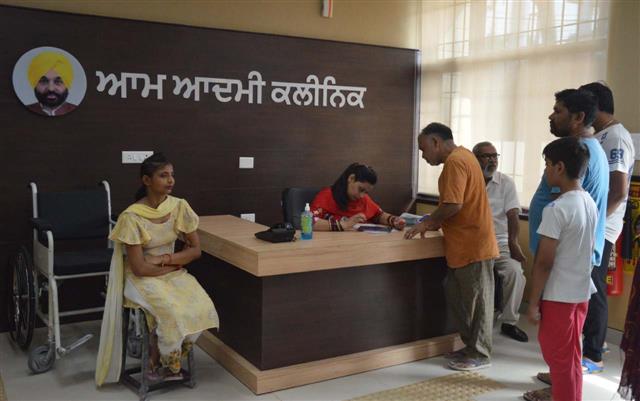 A rush of patients at the Aam Aadmi clinic near Chand Cinema in Ludhiana on Tuesday. Photo: Inderjeet Verma

Fulfilling a much-awaited pre-poll promise to provide free and quality healthcare services to the people of the state, Chief Minister Bhagwant Mann on Monday dedicated the first of 75 Aam Aadmi clinics near Chand Cinema in Ludhiana.

Chief Minister Bhagwant Mann envisioned that Aam Aadmi clinics will be a stepping stone in revamping the healthcare system in the state. He expressed hope that 90 per cent of the patients will get treated from these clinics only, thereby reducing the burden on hospitals. He said only serious patients with major ailments will be referred to the hospitals.

A total of 75 clinics were simultaneously inaugurated across the state, setting in motion the first step towards what was touted as revolutionising primary healthcare facilities in Punjab.

“On this historic day, the Aam Aadmi government has dedicated these clinics to people to ensure that they have access to quality healthcare services, without paying a single penny,” the Chief Minister said, while dedicating the clinic.

He said the clinics would be opened in every nook and corner of the state, adding that in big villages, even two such clinics could be opened for the convenience of the people. He said in the first phase, 75 such Aam Aadmi clinics had been dedicated to the people to mark the 75 years of the country’s independence.

Mann said every clinic would have a staff of four or five persons, including a MBBS doctor, lab technician, and a nurse, to diagnose and treat patients. He said 41 packages with around 100 clinical tests would be offered to the people free of cost. He said his government had fulfilled one of the major poll promises with the setting up of these clinics, both in urban and rural areas.

The Chief Minister envisioned that the clinics would be a stepping stone in revamping the healthcare system in the state. Mann expressed hope that 90 per cent of the patients would get treated from these clinics only, thereby reducing the burden on hospitals. He said only serious patients with major ailments would be referred to the hospitals.

Mann said the revolutionary decision would rejuvenate the healthcare system in the state. He said the patients would have the facility of online appointments. These would provide free medicines and primary diagnostic facilities.

The government hospitals across the state would be spruced up in the coming days for imparting quality health services to the people. Mann said around 2,140 doctors have applied for these posts.