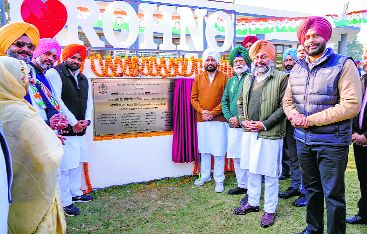 Residents of Rohno Kalan village of Khanna sub-district were enthused to watch Chief Minister Charanjit Singh Channi inaugurating a smart panchayat ghar, ladies park, sathh and a general park, besides his interactions with them.

However, the visitors coming from various parts of the region were disappointed as their major demands to get Khanna upgraded as a district and a medical college went unheard.

“The Chief Minister did not even make passing remarks about our demands during his speech,” said villagers. Channi bade goodbye to people after his speech at the village stadium.

During the rally held in support of probable Congress Candidate and Cabinet Minister Gurkirat Singh Kotli, the Chief Minister paid tributes to Chaar Sahibzadas of 10th Sikh Master Guru Gobind Singh and recollected sacrifice of former Punjab CM late Beant Singh Kotli, who had laid his life for fighting against terrorism in the border state.

“It was only after the government, led by the then Chief Minister Beant Singh, suppressed terrorism with an iron hand that political leaders had started participating in various events, otherwise nobody dared to come out due to fear of extremists,” said Channi, adding that the Kotli family had to pay a heavy price for fetching normalcy to the state.

Channi claimed that during his tenure of 100 days as Chief Minister, he had accomplished equal number of works which remained pending for the last four-and-a-half years.

Another round of US cajoling