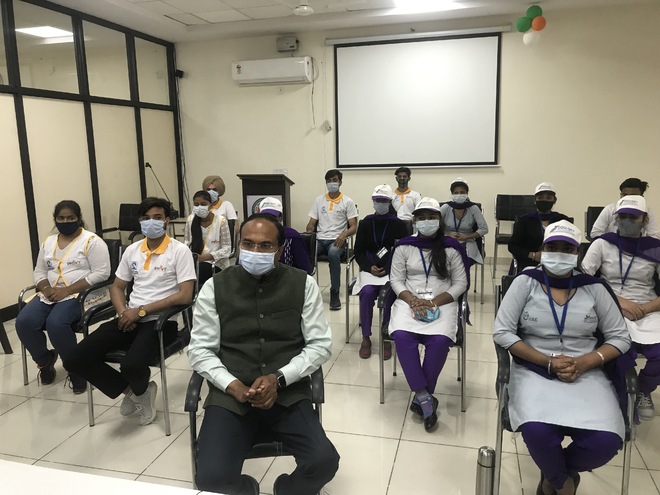 DC Varinder Kumar Sharma interacts with young girls and boys during the “Coffee with DC” interactive session in Ludhiana on Friday. Tribune photo

In a first-of-its-kind initiative aimed at bringing the administration close to the people, especially the youth, Deputy Commissioner Varinder Kumar Sharma on Friday launched, “Coffee with DC” interaction programme with the youngsters in Ludhiana.

Under his maiden session, the DC visited the District Bureau of Employment and Enterprise (DBEE) to interact with the job seekers over coffee.

“The main idea behind the initiative is to establish direct contact with the youth and help them out by motivating them to become self-sufficient,” Sharma said.

The DBEE, where the DC launched his youth conversation programme, had been acting as a single roof solution for the job seekers and job givers in the district.

Accompanied by the ADC Development Sandeep Kumar and the DBEE Deputy Director Meenakashi Sharma, the DC visited the office of the bureau at Partap Chowk and interacted with the youth present there over a cup of coffee.

Describing the bureau as a catalyst for transforming the destiny of the youth in the district, Sharma said besides providing jobs, it has been helping in making the youth self-reliant by enabling them to open their own business.

He said the DBEE was helping the youth to become active partners in socio-economic growth of the state as well.

During the interaction, the DC talked about their qualifications, aims, interest areas and also sought suggestions to improve the functioning of the DBEE.

He motivated the youth to leave no stone unturned for achieving their own dreams in their lives.

He told the officials to ensure that every youth undergoing training under various skill development courses must visit the DBEE.

The DC also instructed the officials to ensure the awareness of DBEE and its functioning among the students either through morning assembly or online classes at the educational institutions across the district. He asked DBEE functionaries to take effective use of social media through video messages so that maximum youth can take benefit of the DBEE.

The DC termed the Chief Minister Captain Amarinder Singh’s ambitious, “Ghar-Ghar Rojgar” scheme a game changer, which aimed at eliminating unemployment from the state by opening up avenues of employment for the youth.

He called upon the youth to focus on their goals besides empowering them with skill development training being impacted by the state government.

Sharma also appealed to the industry leaders to come forward and join hands with the DBEE for getting the skilled workforce.

He thanked the local chapter of the industrialists for assuring support to the district administration in the upcoming job fairs.