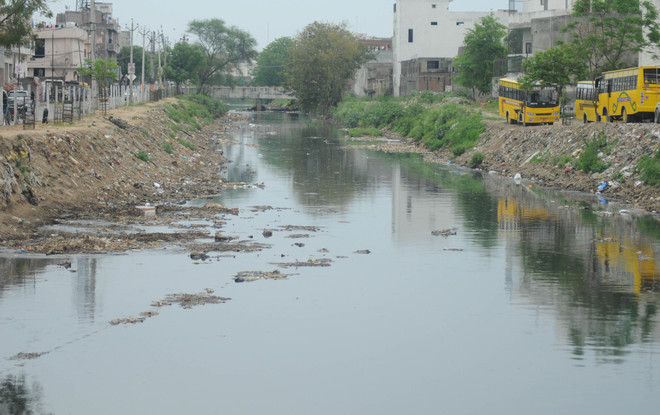 As industrial waste seemed to be visibly reduced in Buddha Nullah now, activists have sought from the National Green Tribunal to order sampling of nullah water to check the pollution levels. There have been no industrial production since curfew was imposed in the state,

The activists have demanded the collection of samples of nullah water should be videographed.

A major source of pollution in the nullah, dyeing and electroplating units have been lying closed since lockdown was announced in the country.

Convener of Naroa Punjab Manch Gurpreet Singh Chandbaja said: “I have written to the NGT panel and requested it to collect water samples from Buddha Nullah. At present, all industries are lying closed owing to curfew/lockdown. However, domestic sewage and dairy waste are

still being discharged into the nullah.”

The Manch has also demanded sampling of water at inlet and outlet points of all sewerage treatment plants located at Ballo Ke, Bhattian and Jamalpur. Water samples should be collected from all major points of Buddha Nullah, he added.

“It has come to light that the state government authorities have allowed industries to start operations. Before the industries start operations, it is necessary to collect water samples from Buddha Nullah and all STPs in the city,” he added.

Meanwhile, a few videos have gone viral on the social media. The video makers claim that pollution in Buddha Nullah has considerably reduced since the industries were shut down amid the Covid threat.

The Municipal Corporation and the Punjab Pollution Control Board keep blaming each other for pollution in the nullah. The PPCB had moved court against municipal officials for their alleged failure in efficiently running sewage treatment plants (STPs), thus leading to a rise in Buddha Nullah pollution.

Mayor Balkar Singh Sandhu had then blamed the PPCB for ignoring the industries which discharged untreated effluents into the MC sewer lines, thus caused damaged to the STPs.

The PPCB had later withdrawn its case.