A fireman tries to save eucalyptus trees, which caught fire from a burning wheat stalk, near Tibba Pull, on Wednesday afternoon. Tribune photo

With the wheat harvesting season, commonly known as Rabi, touching its peak, incidents of farm fires have also started increasing in Ludhiana district, the Punjab Remote Sensing Centre (PRSC) here has confirmed. On Wednesday, as many as 56 incidents of stubble burning were captured in the agrarian state. However, no fire incident was reported across the state on this day in 2021 and 2020, the official figures have revealed.

With the crop residue burning cases touching a three-year high on just the twentieth day of the Rabi season, which officially takes off on April 1, the air quality in the state’s biggest and largest district in terms of area and population has also started deteriorating.

Of these total 152 crop residue burning cases captured in the state so far, Ludhiana reported nine farm fires, which were fourth highest in the state after Moga and Patiala topped with 20 each, Sangrur second with 18 and Ferozepur ranked third with 11 fire incidents till Wednesday.

While Ludhiana reported one farm fire each on April 4, 17 and 20, two on April 16, the district recorded the state’s highest daily four fire incidents on April 18. Among these cases, Dehlon reported a maximum of three, followed by Sidhwan Bet and Ludhiana block one two each, Doraha and Samrala one each.

With this, the air quality has started worsening and the widespread pollution has begun to engulf the industrial capital of the state under a blanket of smog, especially during the evening and morning hours.

“PM2.5 concentration in Ludhiana air is currently 8.8 times above the World Health Organisation’s (WHO’s) annual air quality guideline value,” the experts monitoring the AQI said. However, this was better than 155 AQI (unhealthy) and 151 AQI (unhealthy) recorded here on April 19 and 18, respectively. On April 17, Ludhiana’s AQI was reported at 121, which was also considered as “unhealthy for sensitive groups”. On Wednesday, Ludhiana remained the state’s fifth most polluted city after Ropar, Mandi Gobindgarh, Khanna and Patiala. Ropar remained the state’s most polluted city with 166 AQI, followed by Mandi Gobindgarh second 162 AQI, Khanna third 153 and Patiala was the fourth most polluted city in the state with 138 AQI.

“We have no other alternative. So, we are forced to burn the crop residue as it is the most cost-effective and time saving mode,” reasoned Ajaib Singh, a farmer of Dehlon village, which reported a maximum of three farm fires in the district so far.Another progressive farmer Sadhu Singh of Sidhwan Bet alleged that the government had failed to come to their rescue as official claims of providing machinery and incentives remained only on the paper.

Didar Singh of Doraha, Raj Kumar of Samrala and Yashvir Singh of Ludhiana also lamented that they burnt stubble not by choice, but due to the absence of any other alternative, which suits them.

“PM2.5 concentration in Ludhiana air, which is currently 8.8 times above the WHO’s annual air quality guideline value, is injurious to health. Asthmatic patients, elderly and children. must remain indoors as much as possible to avoid breathing the polluted air,” said Dr Arjinder Pal Singh, a paediatrician.

We are spreading awareness and educating farmers on ill-effects of crop residue burning and exhorting them to shun this practice. Besides, a special campaign is underway to promote direct seeding of rice in which seeds are sown in the field rather than by transplanting seedlings from nursery. — Surabhi Malik, Deputy Commissioner, Ludhiana 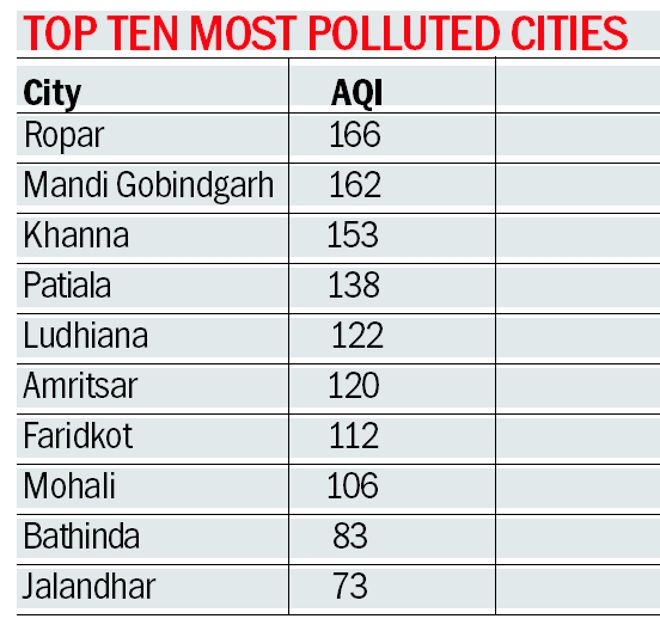