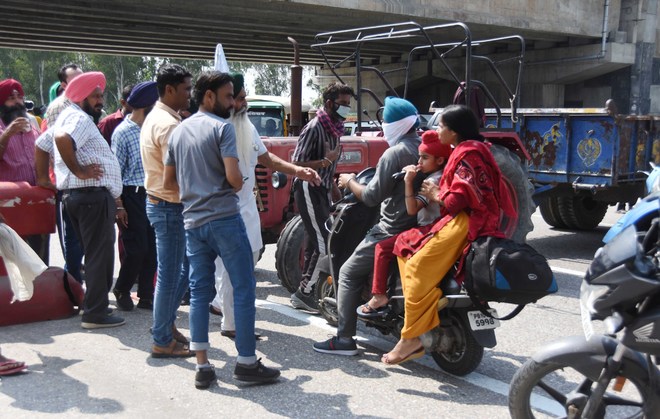 Commuters being stopped by protesters during Bharat bandh in Ludhiana. Photo: Ashwani Dhiman

Commuters and passengers faced inconveniences as farmers and supporters staged protests by blocking highways and major roads at various locations in the Ludhiana district on Monday.

In view of the Bharat bandh call given by the Samyukt Kisan Morcha (SKM) against the three farm laws, farmers had started gathering at various major roads from 6 am to stage dharnas.

Passengers suffered as the government and private buses remained off road amid the protest today. Several passengers waited for long hours for the resumption of bus service at the Amar Shaheed Sukhdev Interstate Bus Terminal, Ludhiana today. The contractual staff of government buses also participated in the protest, extending their support to the farmers.

Stranded on the way, some of the commuters, who were travelling with family members, including kids, were also seen making requests to the protesters to allow them to go ahead. Some persons were also seen arguing with the protesters on the NH-44 in Ludhiana. The protesters, however, were allowing the ambulances and those who had an emergency to go attend.

A commuter on the NH-44 said he had requested to the protesters to allow him to go ahead but he was asked to go back or wait. Some other commuters were also waiting near the toll plaza for resumption of traffic movement.

A number of trucks were parked along the highways in Ludhiana due to the bandh.