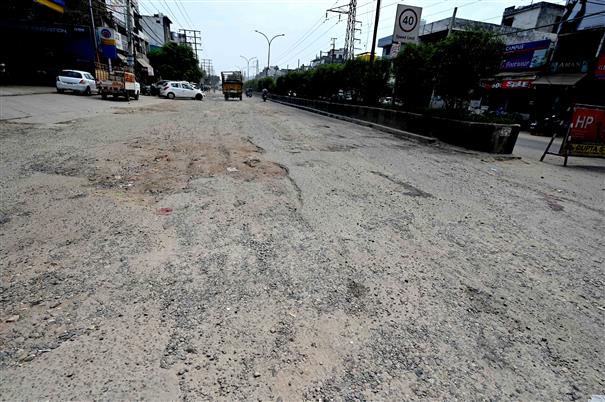 A stretch of Gill Road in a dilapidated condition in Ludhiana. Tribune photo: Himanshu Mahajan

Commuters are a harried lot on badly broken stretches of Gill Road here. Flying plumes of dust and traffic jams on the road have added to their woes. Residents are irked over the delay in the repair of one of the major roads in the city.

Work going on at a snail’s pace, say residents

Residents said the work to construct road portions with the reinforced cement concrete was launched around six months ago but it was going on at a snail’s pace, forcing them to face inconvenience. Besides, the recarpeting work had not been started to date despite the threat posed by big potholes.

According to information, the repair work of the road was earlier divided into two parts as some road portions were to be constructed with the reinforced cement concrete (RCC) process while the remaining parts were to be recarpeted (with bituminous materials).

The residents said the work to construct road portions with the RCC process was launched around six months ago but it was going on at a snail’s pace, forcing them to face inconvenience. Besides, the recarpeting work had not been started till date despite the threat posed by big potholes.

Sher Singh (87), a resident of New Janta Nagar on Gill Road, said the road was in a dilapidated condition for a long period but the repair work was being delayed by the civic body.

He said two-wheelers usually lose balance while passing over the badly damaged portions of the road.

“Flying plumes of dust have increased our woes. The MC should take the matter seriously and ensure early repair of the road in a proper manner,” Sher Singh said.

Kuldeep Singh Khaira, president of the Vigilant Citizens’ Forum, said only a small percentage of the road construction work under the RCC project had been done since the project was launched over six months ago.

Khaira said the concrete work was done on only one side of a stretch from opposite GNDEC towards the Canal Bridge during the period but another side (from Canal Bridge towards GNDEC) was left pending. “Also, the ongoing road work was not satisfactory as cracks recently developed on the newly constructed stretch opposite GNDEC. The compaction process on the road was not done properly, “ he said.

He said the recarpeting work had not been even started on the remaining parts of Gill Road so far. Hence, commuters were facing a lot of inconvenience.

MC Executive Engineer Rakesh Singla said: “Under the RCC road project, concrete road portions were to be constructed at four main intersections and also on GNDEC-Canal Bridge stretch (both sides) on Gill Road. One side of the stretch opposite GNDEC has been constructed while the other side will be constructed soon. The RCC work has also been completed at ATI Chowk while the work would be carried out at portions of Janta Nagar Chowk, Pahwa Chowk near the MC’s Zone C office and Kalra Medical Hall Chowk in coming days. As there is a heavy flow of traffic, the traffic police have been requested to take required measures in this regard.” Singla said the remaining parts of Gill Road from Gill Chowk up to Canal Bridge would be recarpeted soon. He said work order had been issued to the contractor for the recarpeting work that would be started once the RCC work at intersections was completed.