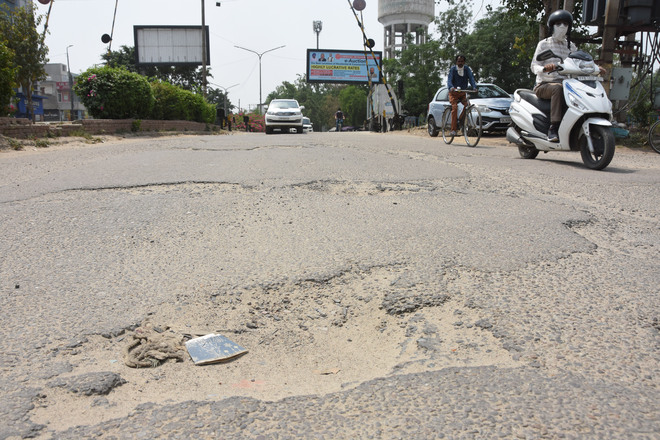 The commuters are a harried lot whenever the potholes are not being repaired timely in the city. As a number of mishaps have taken place on potholed roads, residents ask the civic body to strengthen the roads maintenance wing and ensure the safety of the commuters.

After the winter season, the MC has resumed the work of filling potholes, but it is going at a slow pace. The potholes on a number of roads and internal streets in different zones are yet to be repaired.

The civic body spends crores of rupees on maintenance of roads every year but there are several areas wherein the roads have not been repaired for a long time. The potholes near the Shastri Nagar railway crossing, Bhadaur House and other areas have been crying for attention for months. Similarly, commuters face inconvenience due to potholes on Ishmeet Singh Road, Focal Point and other areas.

Rajesh Gupta, president of the Social Reformers (an NGO) said, “It is commonly seen in the city that the potholes are not repaired timely. If a survey is done today, potholes on roads can be found in many areas. When the people pay taxes, it is the responsibility of the government to ensure the provision of good roads.”

“Many mishaps have taken place on the potholed roads. MC officials concerned must keep a check on the roads and internal streets and they must take timely measures to ensure repair of the broken roads to avert mishaps. A helpline service should be launched for the repair of potholes. If any complaint is filed, it should be addressed in a time-bound manner. The potholes must be repaired within 24 hours once any complaint is received”, Gupta added.

Similarly, the potholes are yet to be repaired in the areas under Ward 57 as per the councillor concerned.