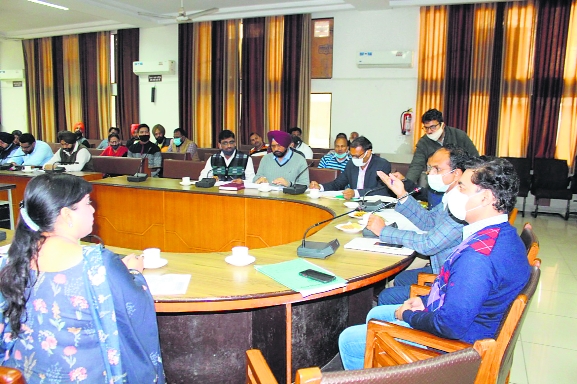 In a bid to ensure the timely completion of the development projects initiated by the state government, the Deputy Commissioner (DC) Varinder Kumar Sharma today fixed the weekly targets of various departments which he would review on a regular basis.

Chairing a review meeting with officials of different departments at Bachat Bhawan here, the DC directed the officials to complete the ongoing development projects within a month and submit utilisation certificates (UCs) for the funds they had received for the works.

He said the projects being undertaken with the help of funds from the village panchayats, Finance Commission and the Rural Development kitty should be completed within the stipulated timeline while announcing that he would hold a weekly review on the progress of the works.

The DC also fixed the weekly targets of the departments concerned so that pending works could be completed in a time-bound manner.

He further asked the officials to expedite the pace of the ongoing works to alleviate rural and urban distress. He said scaling up performance would foster the development of the rural and urban areas.

Sharma asked the officials to leave no stone unturned to achieve the set targets.

He made it clear that any type of laxity in these works was unwarranted and undesirable, adding that the constant monitoring of target achievements would be done regularly.

The DC asked the officials to adopt a multi-pronged strategy to ensure that people were benefited from these policies and programmes of the state government.