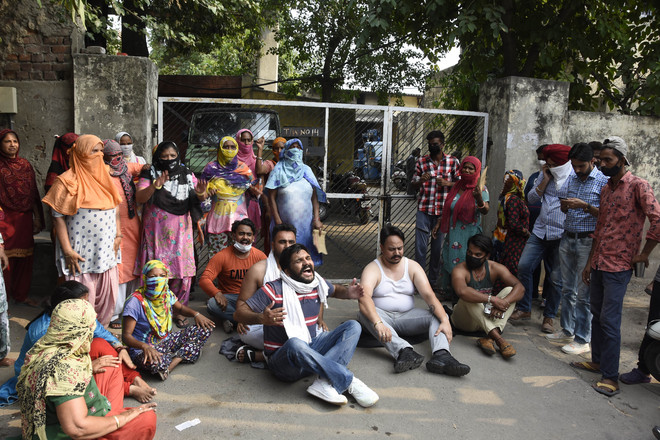 Congress councillor Parvinder Singh Lapran, along with residents of Ambedkar Nagar, protests against the Municipal Corporation in Ludhiana on Wednesday. Photo: Ashwani Dhiman

Infuriated over no water supply to houses at Ambedkar Nagar in Ward No. 48, Congress councillor Parvinder Singh Lapran locked sub-zone office (D2) of the Municipal Corporation (MC) in Model Town on Wednesday as officials concerned ‘failed’ to resolve the problem. Some employees were inside when the office gate was locked by the councillor. Lapran said the complaint about water scarcity was not being resolved by MC officials.

Though there is the Congress government in the state and even party councillors have majority in the MC House, Congress councillor Lapran was forced to stage protest today.

Lapran along with some residents reached the MC office to mark their protest as they claimed water supply at Ambedkar Nagar had been disrupted for around past one month.

They sat on a dharna, raised slogans against the MC and continued to their protest for around two hours. During the protest, Lapran removed his shirt.

“I have complained to the MC authorities many times, but no action has been taken to resolve the problem. I along with residents was forced to protest today,” Lapran said.

“These people have elected me as their councillor. It is my responsibility to get their issues resolved. I will continue to fight for the rights of residents,” Lapran added.

Many people belonging to economically weaker section live at Ambedkar Nagar. Residents said they were forced to wash their clothes at canal as there was no water supply to their houses for the past one month. They put their lives at risk while getting water from the canal, residents added.

“In this hot weather we suffer every day. Our voices are being ignored by the Ludhiana MC. We will continue our protest if water is not supplied to our houses,” said a woman resident of the area.

Later, the MC Superintending Engineer, Ravinder Garg, reached the spot and assured residents that water supply would be restored in their area at the earliest.

However, residents warned MC officials that if water was not supplied to their area, they would be forced to stage protests at the MC Zone D office.