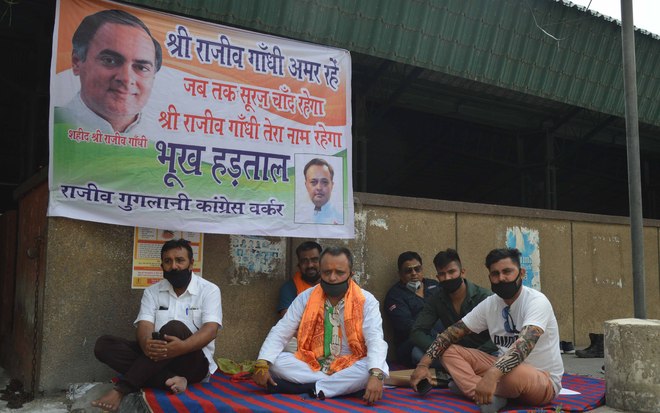 Congress workers stage a protest outside the MC Zone A office demanding renovation of the Salem Tabri park. Inderjeet Verma

To go on hunger strike

Congress leader Rajiv Guglani, along with his aides, staged a protest outside the MC Zone A office and demanded renovation of a park at Salem Tabri where a statue of former Prime Minister Rajiv Gandhi is situated.

Guglani said the area around the statue has become very dirty. The civic body should ensure cleanliness at the park which is in a state of neglect, he added. The Congress leader said, “I visited the place recently and witnessed the poor sanitary conditions there. The MC should take require measures to develop the park. I have written a letter to the mayor in this regard.”

“If no steps are taken within one week to improve the conditions at the place, I will be forced to sit on hunger strike outside the residences of MP Ravneet Singh Bittu and Mayor Balkar Singh Sandhu,” he added.