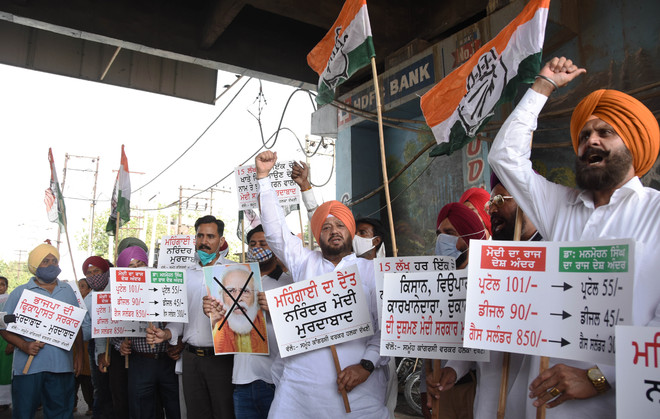 Congress leader Krishan Kumar Bawa and other party workers protest against the rise in fuel and gas prices in Ludhiana on Monday. Tribune photo: Himanshu Mahajan

Congress workers today protested against the rising fuel prices in the country. The protesters burnt photographs of Prime Minister Narendra Modi and raised slogans against him and the Centre.

Addressing the protest demonstration, senior Congress leader Krishna Kumar Bawa said since the day Modi had become the prime minister, the intentions and policies of his government had been against the favour of the common man. “People of the country are facing many difficulties and challenges under his leadership,” he added.

“The Modi government has brought a lot of people to the brink of financial ruin through his policy of demonetisation. The Centre has also sold the country’s railways, ports and airports to the big corporate of the country,” Bawa said.

Bawa said the Modi government was implementing new schemes across the country with the objective of providing financial benefits only to the big industrial houses of the country. “It doesn’t matter to the Modi government if the people in the country die due to inflation. Today, the situation is such that the budget of every household has been shaken due to an increase in the prices of petrol, diesel and gas,” he added.

As the Assembly elections are likely to be held early next year, the newly hiked water and sewer tariff in the city are being politicised by political leaders.

After some opposition leaders, now, a few Congress leaders have recently opposed the new water and sewer tariff.

The exemption on water supply and sewer charges given to residential properties up to 125 sq yds has been revoked while the exemption will be given to the single-storey houses up to 50 sq yds. The new water and sewer tariff has been hiked up to 60 per cent for different categories.

Navneet Singh Ghail, a Congress councillor, said: “The MC should give relaxation to people during these tough times. The new water and sewer tariff should not be implemented now.”

MLA from Ludhiana West Surinder Dawar said he had raised the matter before the Mayor. The hiked tariff should not be implemented.

When the Municipal Corporation House had given nod to the resolution regarding the new water and sewer tariff in November last year, a majority of House members, including opposition councillors as well as ruling councillors had remained silent on the matter.