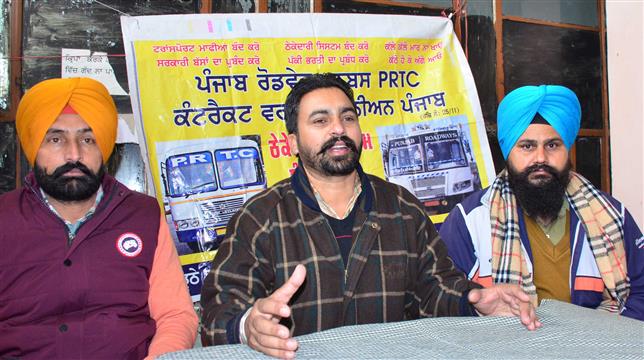 Contractual workers of the Punjab Roadways, PUNBUS and PRTC address a press conference in Ludhiana on Tuesday. Photo: Ashwani Dhiman

Accusing the Congress government in the state of failing to regularise their services despite making promises with them, members of the Punjab Roadways, PUNBUS and PRTC Contract Workers Union, Punjab, announced to intensify their agitation.

While addressing a press conference, union leaders Shamsher Singh Dhillon, Jagtar Singh and Gurbaj Singh said the government had earlier assured that their services would be regularised but nothing was done. They alleged that the bribe of Rs 1.5 lakh is being collected for recruitment of new staff. Moreover, favourites of some Congress ministers are being recruited by violating the norms, they alleged.

The union members alleged that the government is making tall claims to get credit of adding 842 new buses and renovation of bus stands with Rs 400 crore, but the fact is that the government took loan for purchasing new buses and renovation of bus stands. They said PUNBUS has taken a loan of Rs 400 crore against bus stands while the government and Punjab Transport Minister are praising themselves for the same without any reason. They said the transport mafia is still active without any fear of law as the number of illegal buses has increased.

Union members Ravinder Singh, Amandeep Singh and Daljit Singh said the government is not reinstating those employees who were suspended during the struggle of employees. The union members also levelled allegations of corruption against the management concerned.

The employees said they will hold a protest in front of the DC office on January 20, while they will conduct a flag march after January 24 in the Gidderbaha constituency from where Transport Minister Amarinder Singh Raja Warring is MLA. If the management do not meet their demands, the employees will go on strike.