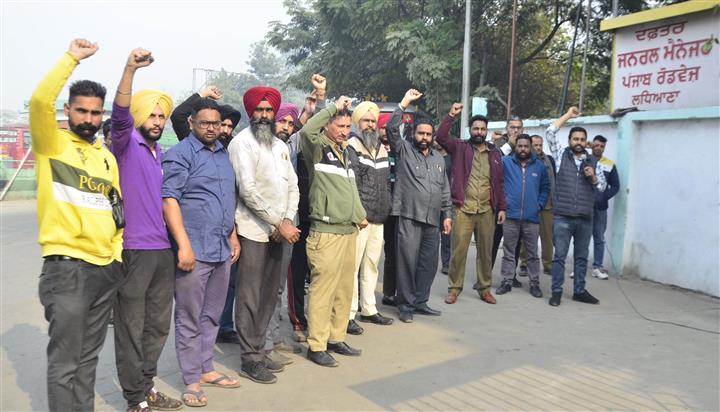 Members of the Punjab Roadways, PUNBUS and PRTC Contract Workers Union staged a protest rally in front of the PUNBUS depot here against the state government for allegedly harassing employees and failing to meet promises.

The protesters raised questions over the inquiry into the suspension of one of their colleagues at the Batala depot. They alleged that the facts were ignored during the probe. They said their colleague (conductor) was suspended despite seven passengers were in favour of him. They said the matter would be raised before the Chief Secretary and the Chief Minister during the next meeting. They also opposed the recruitment of new drivers on an outsourcing basis.

Shamsher Singh, general secretary of the union, blamed the state government and higher officials of the Transport Department for harassing employees without any reason, forcing them to mark protests and go on strike.

“Before coming to power, AAP had made many promises, including regularisation of jobs of the contractual employees, employment for youths and elimination of the transport mafia. But, after coming to power the AAP government failed to fulfill any of these promises. Instead, the state government is going to recruit new staff on an outsourcing basis in the PRTC and PUNBUS. Also, the government is planning to benefit corporate houses as private buses of such houses are to be included in the PRTC and PUNBUS,” he alleged.