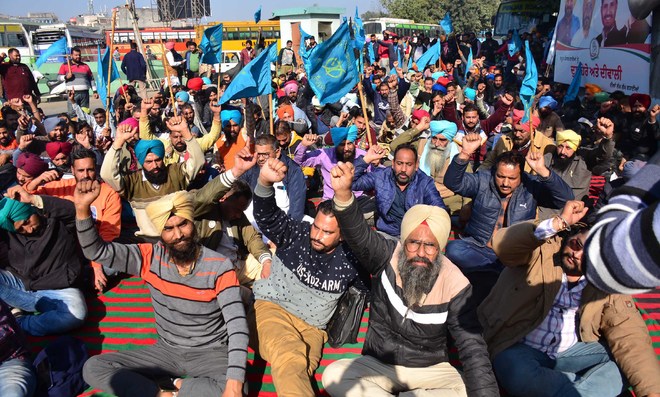 Demanding regularisation of their services, contractual employees of government-run buses have gone on an indefinite strike from Tuesday onwards. The strike hit the government bus services badly.

The members of the Punjab Roadways, PUNBUS and PRTC Contract Workers Union has given a ‘chakka jam’ call to mark their protest against the state government for ‘ignoring’ their long pending demands. The union members blamed the Punjab Government, led by Chief Minister Charanjit Singh Channi, for forcing them to go on strike as their voice was ignored.

Meanwhile, passengers faced inconveniences as majority of government buses were not operational today. According to a union leader, about 90 per cent government-run buses remained off road. However, government buses that are being operated by regular employees and private buses are plying on the roads.

Satnam Singh, a member of the union, said they had conducted a meeting with the Punjab Transport Minister on November 22 and an announcement was then made that the employees would go on a strike if their demands are not met. The Punjab Government did not find out any solution to resolve the matter to date, forcing the employees to go on a strike, he added.

The employees said former Chief Minister Capt Amarinder Singh and present Chief Minister Charanjit Singh Channi had assured to regularise the services of employees but nothing was done. They said the services of no contractual employee of the Transport Department has been regularised. They accused the government of making attempts to eliminate government transport services.

The protesting employees said the employees of the Transport Department had performed duties with dedication during the Covid-19 pandemic and eight of them had lost their lives. But, the government paid no compensation to the families of victim employees, they said.

Instead of meeting their demands, the government is making attempts to suppress the voice of agitating employees by registering false cases against them, they alleged.

Jaspal Sharma, another member of the union said the government must add a new fleet of 10,000 buses and regularise the services of contractual employees at the earliest. The employees also demand hike in salaries for data entry operators and other workers. They urged the government to revoke the orders under which some employees were expelled in a ‘wrong manner’.

The employees announced to intensify their agitation from December 10 onwards if their demands are not met. They will stage protests in the respective constituencies of the Punjab Transport Minister and Chief Minister.