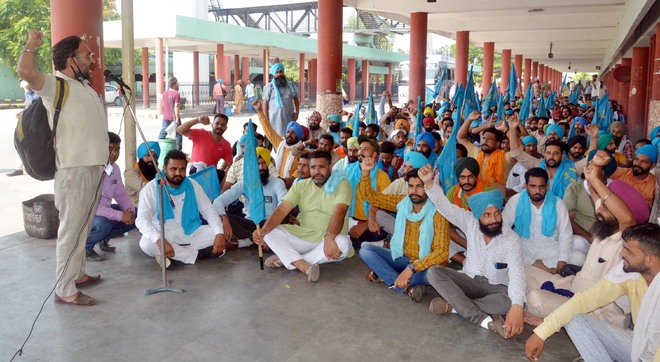 Contractual employees protest at the bus stand in Ludhiana.

Passengers faced a lot of inconvenience as Punjab Roadways/PUNBUS Contract Workers Union Punjab and PRTC contractual employees went on three-day strike and kept the bus stand closed for four hours today. The protesting employees were demanding regularisation of jobs and salary equal as per the work.

Passengers remained stranded due to protest by employees of government-run buses. Many passengers had no prior information about strike called by employees.

The union state president, Satnam Singh, said, “The government has not resolved pending issues till date. The director state transport has fixed a meeting with employees, but it is just a formality.”

They were forced to go on a three-day strike from today onwards as the government did not hear their voice, he added. Employees also raised questions over giving jobs to sons of MLAs, but contractual employees not being regularised, he said.

“In case any employee dies due to Covid-19, the government should give Rs50 lakh compensation to his family and a government job to kin,” he added.

Employees also blamed the government for not adding new buses to the existing fleet. They alleged that it seemed the ruling dispensation was backing the transport mafia in the state and wanted to end the government-run transport in Punjab.

On the occasion, the association secretary, Praveen Kumar, said the struggle would continue till jobs of all contractual workers were not regularised. — TNS