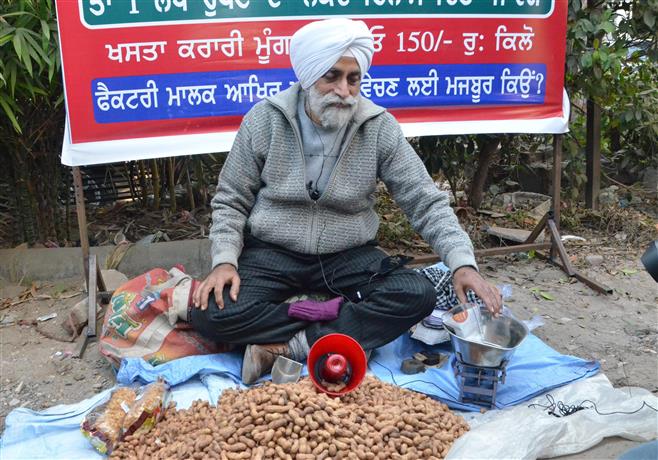 A businessman protests by selling groundnuts outside the LIT office in Ludhiana. - File Photo

During the year that is about to end, the Ludhiana Improvement Trust (LIT) though remained in the news but mostly for the wrong reasons. It would be no exaggeration to say that 2021 turned out to be the ‘most controversial year’ for the autonomous body under the stewardship of Raman Balasubramnium.

Several issues like controversial e-auctions, conversion of sites reserved for special purpose or green belts into residential plots, bid to change names of existing schemes, row with the trustees or spending more money in other areas in the city on development at the cost of its own colonies, allegations of cash for select plots (under LDP quota) and massive irregularities in inviting and allotments of tenders worth crores of rupees hogged the limelight showing the institution in the poor light.

On the positive side, twice shelved high-rise housing scheme – Atal Apartments, was re-launched for construction of HIG and MIG flats in multi-storey towers. New roads and streets were constructed/repaired, interlocking tiles were laid and parks were equipped and beautified in some of the LIT colonies.

e-auction of commercial land in Model Town Extension: Sale of 3.75 acre prime commercial land in Model Town Extension to an industrial house-cum-property developer can easily be termed as the biggest controversy of the year for LIT. Amidst allegations of selling land at a throwaway price by all major opposition parties, the matter went to the High Court. A committee, led by the Deputy Commissioner, denied having fixed the reserve price of the land and the Punjab Government cancelled the auction with directions for a fresh auction at a revised reserve price. On the sidelines of this controversy, the LIT Chairman filed a defamation suit against certain political leaders and members of media fraternity.

Unsold built-up commercial complex: Another year have gone by but the ‘white elephant’ of the Trust — a built-up 2.22-acre commercial complex in a posh area on Maharani Jhansi Road — remained unsold even after fourth (or perhaps fifth) attempt. LIT made yet another desperate, but unsuccessful attempt to sell the complex at a slashed reserve price of Rs 157 crore (from Rs 197 crore). The complex failed to find any buyer and not even a single bid was received for the ‘jinxed’ property.

Row with trustees: The LIT chairman, known for his outbursts against leaders of Opposition parties for their criticism of his ways of working, did not spare even the trustees appointed by the Punjab Government and from among the ranks of the Congress. He had verbal duels with some of them more than once and went to the extent of using uncharitable language with at least one of them. In protest against the attitude of the chairman, the trustees walked out from one meeting and Cabinet Minister Bharat Bhushan Ashu had to intervene to make the trustees sign the agenda of the meeting.

Atal Apartments: Lone significant achievement of the Trust during the year was revival of twice-shelved first high-rise housing scheme, Atal Apartments, in an area of 8.80 acre at Shaheed Karnail Singh Nagar on Pakhowal Road here with Chief Minister Charanjit Singh Channi laying (or rather re-laying) the stone earlier this month. The complex would have 11 towers with 576 residential flats (336 HIG and 240 MIG) with all modern amenities. But even this project was mired into a little controversy as the chairman wanted its name changed after legendary Urdu poet Sahir Ludhianavi. However, apparently better sense prevailed, the government put its foot down and the scheme was re-launched with the same name.

Infrastructure development: LIT executed a number of projects for improvement in urban infrastructure development in several colonies where roads and streets were reconstructed, parks were equipped and beautified, LED streetlights were installed, water supply was augmented and drainage system improved. At several places interlocking tiles were laid in walking and parking areas of main markets.

Event of the year: ‘Event of the year’ award deservedly goes to a businessman who put up a ‘farri’ outside the Trust office to sell ‘moogphaali’ while levelling charges of corruption against the chairman and executive office for approval of sale deed.