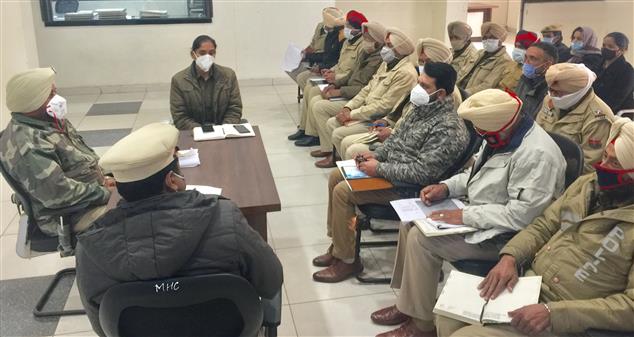 The police claims to have taken proactive measures to ensure strict implementation of the Election Commission guidelines during the upcoming Assembly polls, scheduled to be held on February 14.

Besides organising meetings with office-bearers of social and political organisations, senior functionaries under the supervision of the Malerkotla SSP, Dr Ravjot Kaur Grewal, and the Ludhiana SSP (Rural), Rajbachan Singh Sandhu, sensitised cops deployed in various beats on poll-related issues. Flag marches were also held to boost morale of residents.

The Ahmedgarh DSP, Harvinder Singh Cheema, the Raikot DSP, Rajwinder Singh Randhawa, and the Amargarh DSP, Sandeep Vadhera, lead cops during events organised to get the model code of conduct implemented in the region.

The Ahmedgarh DSP, Harvinder Singh Cheema, said steps had been initiated to update cops about proactive measures to be taken during the election period and instil confidence among residents in general and voters in particular.

Office-bearers and activists of various outfits were roped in to sensitise residents about the significance of fair polling at various levels, including local bodies, state Assembly and the parliament.

Addressing meetings convened by the Sadar SHO, Sanjiv Kapoor, and the City SHO, Arashpreet Kaur Grewal, DSP Cheema called upon cops to do their best to implement the Election Commission guidelines in letter and spirit so that residents could use their right to vote without any coercion.

“We have to ensure adequate security arrangements at and near polling stations and polling booths to facilitate free and fair elections. Voters have every right to use their right to vote without bowing to any pressure,” said Cheema while maintaining that candidates and their agents would also be advised to follow guidelines of the State Election Commission during polling.

“No one will be allowed to disrupt peace and tranquillity of the area on any pretext,” said Cheema.